20 years of transnational cultural cooperation in a book

K2.0 and CZKD document cultural bridges between Kosovo and Serbia.

The launch of the monographic book “Case Study Përtej” was held yesterday (Thursday, June 28) at Qendra Multimedia in Prishtina. A cooperation between K2.0 and the Belgrade-based Center for Cultural Decontamination (CZKD), the book is a critical documentation of cultural cooperation between Kosovo and Serbia between 1997 and the present day.

The publication is the result of a year-long documentation process that included interviews with some of the most active and relevant voices in the cultural scenes of both countries over the past two decades. Majlinda Hoxha, Rozafa Maliqi and Luna Đorđević conducted the interviews and curated this chronology, which takes life through the voices of various actors such as dramaturg Jeton Neziraj, art historian Vesa Sahatçiu and anthropologist Eli Krasniqi in Kosovo, and philosopher Branimir Stojanović, artist Darinka Pop-Mitić, and art historian and curator Vida Knezevic in Serbia. 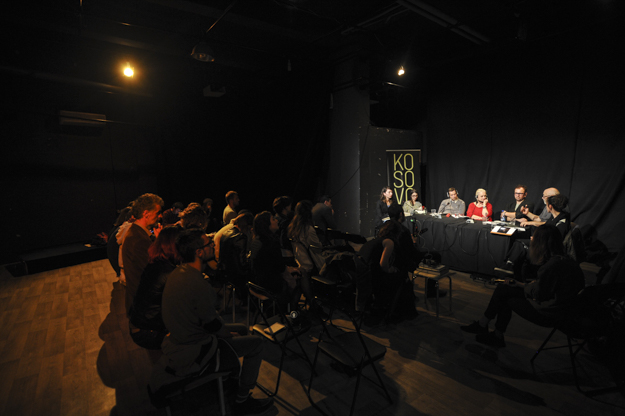 Through documentation and the narrative offered by the interviewees, “Case Study Përtej” offers a chronology of political and cultural events in Kosovo and Serbia between 1997 and 2017. The starting point of the chronology is the exhibition “Përtej,” which was opened on June 5, 1997 at CZKD in Belgrade. The exhibition is remembered today as a groundbreaking step in the Kosovar Albanian arts scene, as four Albanian artists – Sokol Beqiri, Mehmet Behluli, Maksut Vezgishi, and Ilir Bajri – exhibited their works in the Serbian capital amid high political repression of the Serbian regime in Kosovo.

Last night’s launch in Prishtina was the first formal presentation of the new publication, even though a similar launch had been planned last week at the Center for Cultural Decontamination in Belgrade. However, on June 19 the main initiator of the 1997 Përtej exhibition, philosopher and arts critic Shkëlzen Maliqi, was not allowed to enter Serbia when attempting to cross the border with K2.0’s Besa Luci and Majlinda Hoxha, and Qendra Multimedia’s director Jeton Neziraj. 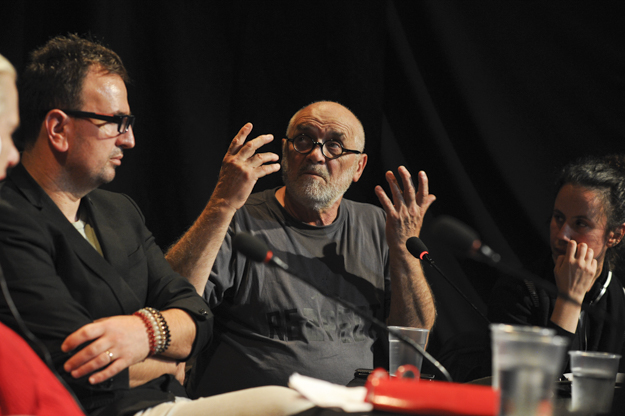 With no reasons given for this denial, and in order not to contribute to the normalization of a practice that is against freedom of movement – one of the main points of the official dialogue between both governments in Kosovo and Serbia – the entire team decided to cancel the presentation and come back to Prishtina.

Yesterday’s Prishtina launch of the “Case Study Përtej” book was in the form of a public discussion, including dramatist, cultural activist and director of CZKD in Belgrade, Borka Pavicevic; philosopher, art critic and curator of Përtej ’97, Shkëlzen Maliqi; Serbian-Albanian relations scholar and researcher, Aleksandar Pavlovic; playwright and director of Qendra Multimedia, Jeton Neziraj; and editor-in-chief of Prishtina Insight, Lura Limani. 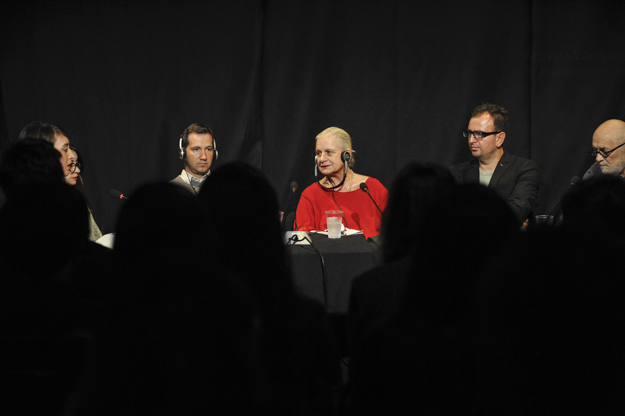 The launch was kickstarted with the screening of archival footage showing Serbian artists, such as Milica Tomić, commenting on the opening of Përtej in 1997 at CZKD. Many of those taking part at the time deemed the exhibition to be a cultural bridge and an opportunity to communicate with Kosovar Albanian artists through their creations to understand perspectives that were otherwise lacking in the Serbian arts scene and in the media at large.

“Here we were called traitors,” Maliqi said, referring to the Kosovar Albanian artists who traveled to Belgrade for Përtej. “People were being arrested here, where there was an apartheid, and this is what newspapers were saying, that we were trying to cooperate with the enemy.”

"It's a very dangerous climate that reminds me of many things, and for that reason seeing this book come out after 20 years is an inspiration."

Maliqi recalled the opportunity as an essential step in the international arts scene, as Belgrade was a larger platform than other cities in former Yugoslavia. “The only opportunities to exhibit in Kosovo were places like Hani 2 Robertëve and the Koha gallery,” he said. “We couldn’t promote artists elsewhere besides these cafés.”

For Maliqi, the exhibition in Belgrade contributed to the introduction of the Kosovar artistic scene on an international arts platform.

Dramatist Pavicevic, who as the director of CZKD was ultimately responsible for the opening of Përtej in Belgrade, said that the whole event was surrounded by what she defined as a “mystification of fear,” given the political context. She added that the cultural and artistic cooperation between both societies continues to be jeopardized.

“Everything is covered by the mist of scandal, and it’s hard to speak about the content of what is being done,” she said, recalling the recent editions of the festival Mirëdita, dobar dan – hosted by CZKD – which sparked protests by Serbian nationalist groups. 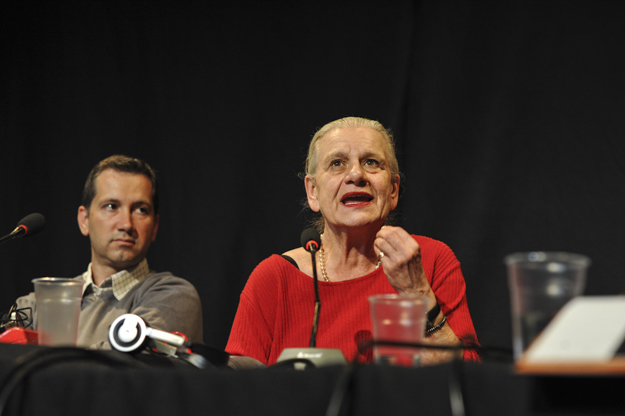 Borka Pavicevic said that transnational projects are particularly important in the current climate of the rise of the extreme right. Photo: Atdhe Mulla / K2.0.

Speaking about the context of the meaning of the Përtej exhibition, Pavicevic reflected on the role of cultural cooperation today. “This is a totally new context in Europe,” she said. “These projects have a more important meaning today in the context of the rise of the extreme right wing and the high protectionism of states in answer to all these people [in need]. It’s a very dangerous climate that reminds me of many things, and for that reason seeing this book come out after 20 years is an inspiration, it’s creating a space for thinking.”

‘Exhaustion’ in the cooperation

Dramaturg Jeton Neziraj was keen to point out that a certain distance has grown between certain cultural actors, including some artists and cultural institutions. “The interests of certain cultural institutions and artists have changed and some opportunities for cooperation are now limited,” Neziraj said. “Why this has happened is hard to explain, but I’m sure that the political developments have definitely had an influence and are an obstacle as there is a new climate that is not favorable.” 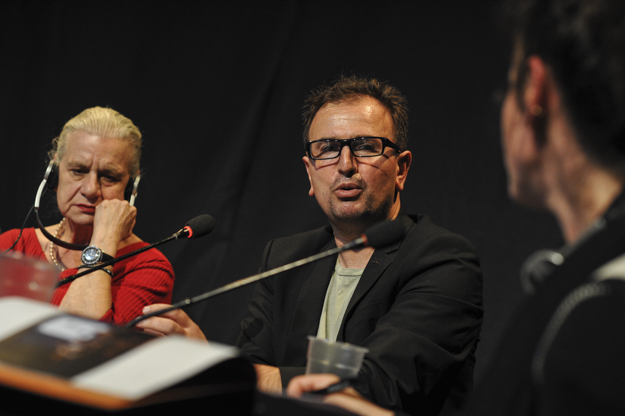 Jeton Neziraj said that while it would be easy to give up on cultural cooperation in the face of political obstacles, it is essential to keep such links alive. Photo: Atdhe Mulla / K2.0.

Neziraj referred to the recent incident at the border with Shkëlzen Maliqi in order to highlight the existing feeling of exhaustion among cultural actors, given the political and administrative obstacles, and suggested that there is a risk that in this context many creators may simply give up. However, he also insisted that the consequences of ending cooperation between independent actors, such as the one between Qendra Multimedia and CZKD, could be fatal. “I cannot imagine a political dialogue without this cultural dialogue,” he concluded.

In this regard, scholar Aleksander Pavlovic recalled the need to create “a better story,” reflecting on the power of myths and propaganda established by the dominant nationalist narratives. “It seems to me that what we cannot match the impact of one political statement, or one drone, and it is not our job to try to change everything,” Pavlovic said. 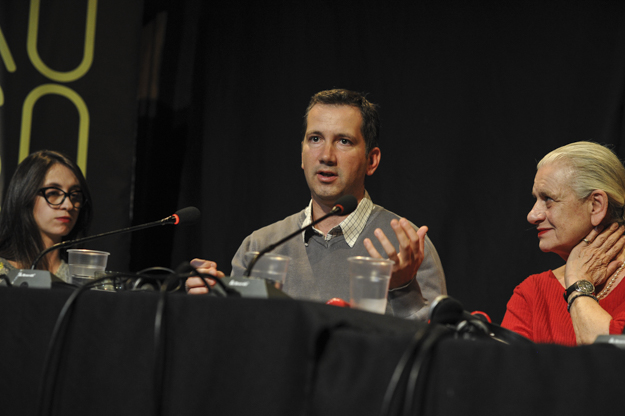 Aleksander Pavlovic said that individuals can be relatively powerless in the face of dominant nationalist narratives, but that they should keep focusing on fulfilling their own roles to the best of their ability. Photo: Atdhe Mulla / K2.0.

He reflected on the capacity of vanguards and forward-thinking groups in every society, and he pointed out: “We’re responsible to do the most we can in each of our mediums, whether that’s theater, or a cultural center, or scholarly work.”

Prishtina Insight’s Limani reminded the forum that “art is struggle, art is conflict,” and reflected on how artists and their projects have been politicized and put at the service of certain national narratives, often blurring their main artistic purpose.

“The best example is Dren [Maliqi]’s ‘Face to Face,'” she said, referring to a work by the Kosovar artist showing a Popart inspired Adem Jashari juxtaposed against another icon, Andy Warhol’s Elvis Presley; the piece was supposed to be exhibited at a 2008 retrospective in Belgrade, but the exhibition was ultimately canceled due to protests. “This is an example of having an inherent critique of a nationalist discourse [in an artwork] being turned into an object of Albanian nationalism,” she said. 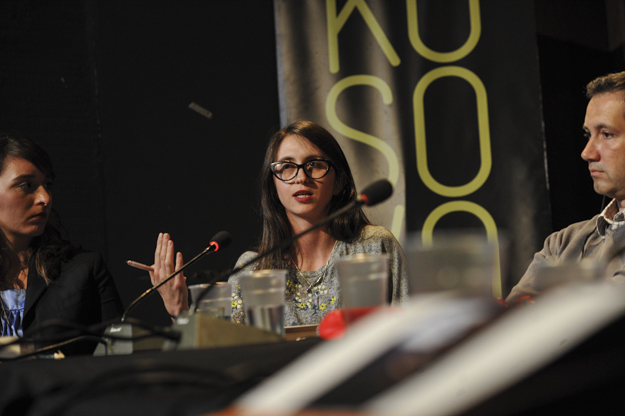 Lura Limani said that art is inherently a struggle and a conflict. Photo: Atdhe Mulla / K2.0.

For Limani, the danger rests in the fact that artists, critics and even citizens have no control over the interpretations and the politicization of their works beyond their intended purposes. K

“Case Study Përtej” is published in Albanian, Serbian, and English, and an online version will be available soon at www.kosovotwopointzero.com and www.czkd.org.

Crumbs of the government recovery package

The ambiguity of reality: dismantling the social [...]