Neither the light rain nor the fact that the final construction work at the former factory was still being completed could prevent the local residents and volunteers from finishing what they had started.

For the past week, the diverse group of local young volunteers, who had been joined by others from Prishtina, Tetova and Belgium, had been hard at work on the abandoned industrial site, building a new multidimensional social center for local people in Tirana.

Residents of the area had been informed about the opening event of Tirana Social Center a week earlier, and they inquisitively came along, many with their children, to see what was happening.

“We can see that they worked a lot, because the place was a mess,” said Etleva Hysenbelli, who had come along with her children to Saturday evenings opening event. 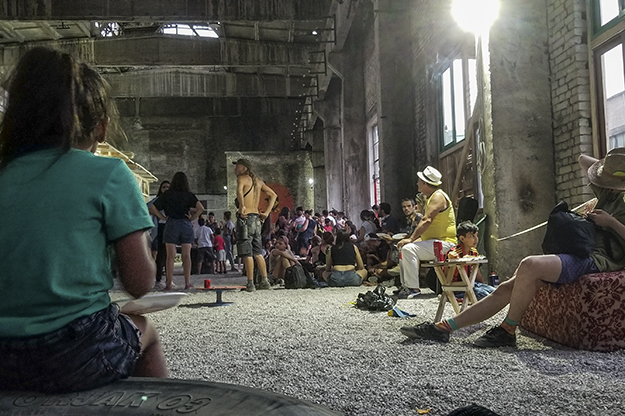 The opening event of the Tirana Social Center attracted a wide variety of people, eager to find out what the new space was all about. Photo: Fjori Sinoruka.

Early on in the evening, the children of the neighborhood used the space to play and have fun with each other, enjoying the food served by young volunteers at the new center. Children’s songs were played on speakers and it felt like an atmosphere dedicated to them.

“This project is very good for the area, for our children, for us,” said Florida Caka, a resident of the area, who had come along with her family. “Usually our children have no place to play, and that is particularly why it made us happy. With this building being repaired, I believe we will have a better future for our children.”

As the evening went on and the parents and their children left, they were slowly replaced by young adults, eager to see what the new space had in store for them. Consequently, the atmosphere and the music also changed, with a DJ playing electronic music into the early hours.

The 900 square meter industrial building in the Shkozë neighborhood in the suburbs of Tirana, was formerly a cast iron foundry department of a tractor factory in its heyday. But long since abandoned, a group of Tirana young people decided it would make a perfect public space to turn into a social and cultural center for Albania’s capital, and dedicated their energies to making it happen.

Fiona Mino, one of the volunteers, said that it had taken about a week to clean the building, which had stood the test of time, but added that the garbage had taken its toll.

“The situation was such that we had to clean for 2-3 days with our hands, picking up garbage, and then moving it away with bulldozers,” she said. 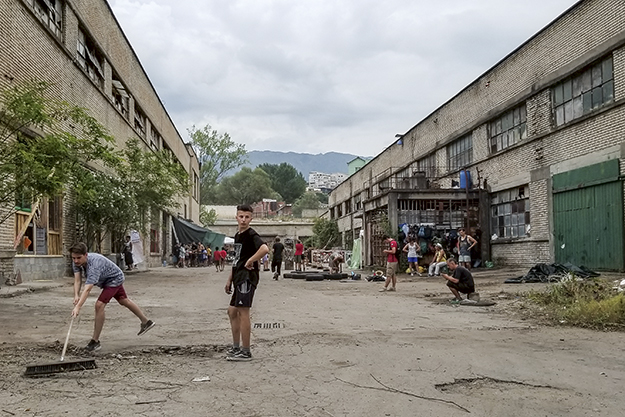 Young people have been intensively revitalizing the former factory for a week, but preparation work has been ongoing since last year. Photo: Fjori Sinoruka.

The project as a whole has been almost a year in the making, having been kickstarted in August 2018, when, inspired by similar projects in Kosovo and North Macedonia, a group of young people got together and decided to do something in their community. They reached out to Toestand, a Belgium-based initiative that works on revitalizing abandoned spaces, and that had also helped to get Prishtina’s Termokiss and Tetova’s SCS Tetova off the ground.

“They agreed to implement a project in Tirana and we had to engage to find a building,” she said. “Every Saturday, volunteers went on walks and bike rides in and around the city to find abandoned buildings.”

But here they met a challenge. After three to four months, the volunteers had selected 100 buildings, but none of them were public property.

Eventually, they came across the former tractor factory, one of the few buildings that had evaded the wave of privatizations that followed the change of political and economic system from the ’90s onward. 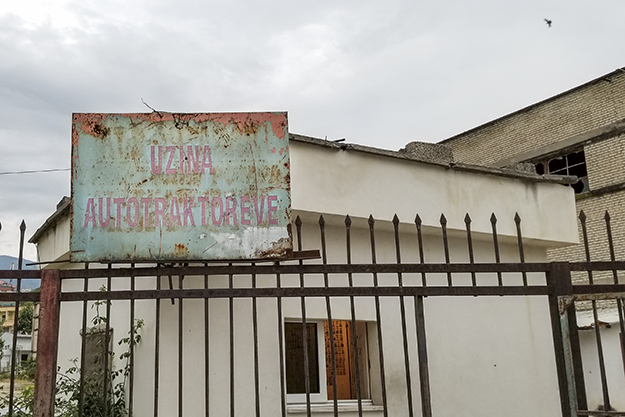 Finding a suitable public building in Tirana proved difficult due to the mass privatizations that have taken place since the end of the former communist regime. Photo: Fjori Sinoruka.

With the first challenge met, the next was to get a permit from the Municipality to use the space for social and cultural purposes. Again, Mino says, this was far from straightforward.

“They were notified about the project in August 2018,” she said. “They knew the dates and that we needed a building. We held meetings with them almost every fortnight.”

Mino says that despite being in continuous contact the Municipality, “things went south, perhaps because of politics, because we needed the permit in June so we could open the center in July.”

After weeks of receiving no response, they finally got the green light just a few days before the start of the project.

“I think this happened mainly due to our partnership with Toestand in Belgium, Termokiss in Prishtina and SCS in Tetova,” she said. “Because the Municipality doesn’t recognize us, since we are an informal group.”

With the help of friends

Working in collaboration with the other groups also meant that the Tirana volunteers could benefit from the experience of people who had been through similar frustrations when getting their own projects off the ground.

Many of these same people also made the trip to Tirana to spend the week leading up to the opening helping to clean up the space, get involved with the construction work and preparing the food that was served on the opening night.

One of the volunteers from Prishtina was Erleta Morina, who has been heavily involved in Prishtina’s Termokiss space, a formerly abandoned facility — part-owned by Kosovo’s public heating company — which was turned into a community social space in 2016.

“The flow was more or less the same,” she said. “We — the community of Prishtina — found an abandoned space, and then revitalized it as part of the project.”

Getting the building up and running is just the first part in the journey.

SCS Tetova in North Macedonia opened last year, and the energy behind the project also still seems to be going strong. Taulant Salihi, one of its volunteers, also traveled to Tirana to help get the new project off the ground.

“It’s a similar project to the one in Tirana. We also cooperated with Toestand, Termokiss and local volunteers,” he said. “We fixed up the space and started to organize events such as film screenings, exhibitions, discussions workshops… we also have an online radio.”

On Sunday morning, after the opening night, the volunteers all met again to discuss the event and to finish off the work that they hadn’t managed to finalize the day before, with many of them agreeing to stay on another two days.

Morina points out that the next steps are another important juncture for the space, as getting the building up and running is just the first part in the journey — at Termokiss, the real work started when the building project ended.

“That was when the property was given to the community, and the community gathered and organized itself,” she said. “We have no director. We have a horizontal structure in which everyone has the right to vote. Everyone is welcome to become a member. It’s based on the needs of the community.” 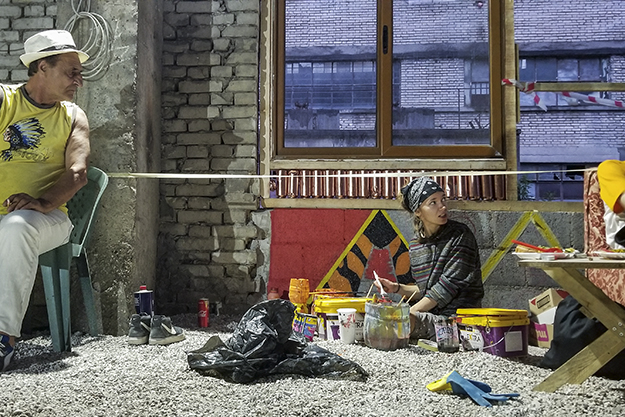 Revitalizing the former factory in Tirana’s suburbs has been a real international effort, with volunteers coming from Kosovo, North Macedonia and Belgium to help out. Photo: Fjori Sinoruka.

The youth in Tirana hope that the metamorphosis of the former tractor factory building will also not simply be physical, but also symbolic. Above all, they hope that it will serve a community that is located far from the center of Tirana and its bigger cultural or social activities, providing space to learn foreign languages or host play areas for children.

It will continue to function based on the work of young volunteers from the city, but they say that the events, projects and activities they hold will be dictated by the requirements and requests of local neighborhood residents.

Mino has high hopes that this is the start of something special in Tirana, that has a different philosophy to other cultural ventures.

“My objective is to keep this cultural and social center autonomous, meaning that we make plans about which artist we want to invite or which formal or informal groups we want to form partnerships with,” she said. “My wish is for this center not to be like cultural centers that are managed by two people who compile the whole event schedule. We want people to come to us and to work with them.”K