Albin Kurti has become prime minister of Kosovo for the second time after his new government was approved by the Assembly on Monday (March 22).

He will head up a government with three deputy prime ministers and 15 ministries, almost a year to the day since his first administration was felled by a vote of no-confidence.

The joint government between Kurti’s Vetëvendosje (VV), Vjosa Osmani’s “GUXO” initiative and minority parties received 67 votes in favor, 30 against and no abstentions, from the 107 deputies present in the session.

Addressing the Assembly ahead of the vote, Kurti said that after facing many obstacles, what had seemed unattainable had become a reality.

Eight of the ministers in the new cabinet are from VV, two from GUXO and three from minority parties, while two of the incoming ministers are not party affiliated. 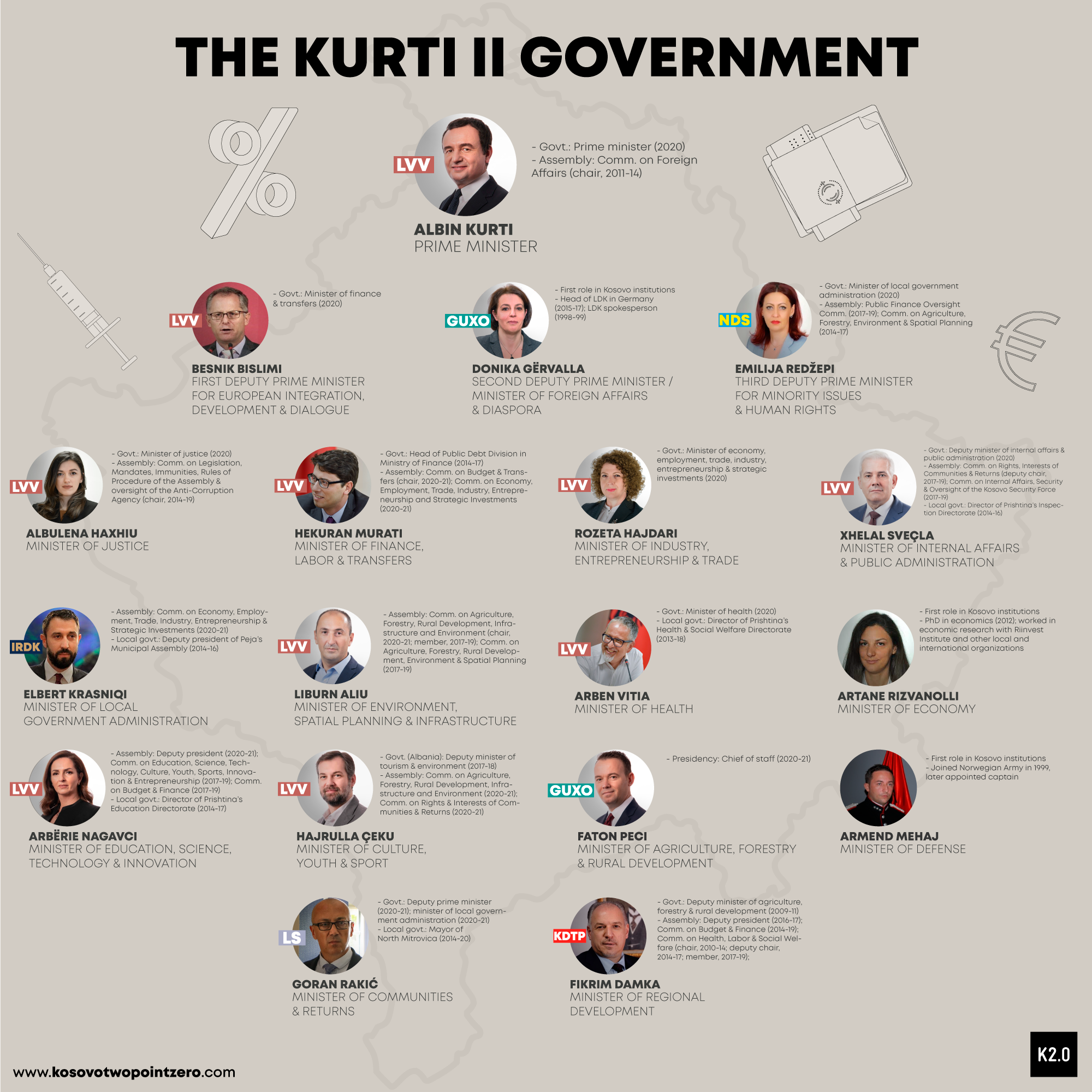 Setting out his plan for government, Kurti re-emphasized many of the topics that formed part of the campaign that swept VV’s joint-list with Osmani to its landslide win in February’s election, including addressing the pandemic which has escalated once again in recent weeks.

“With the minister of health we will initiate a plan to bring COVID-19 under control with measures that will reduce the number of new cases and will lead to the elimination of deaths,” he said. “Within the year we aim to provide vaccines for 60% of the population, which will provide sufficient immunization to gradually begin the transition to normalcy.”

He pledged to focus on wide-ranging reforms in the health sector, justice — with vetting of officials as a priority — education, economy and social welfare.

Outlining a roadmap for the COVID period and recovery beyond, he said his government will prioritize the inclusion in the labor market of women, youth, members of minority communities and families on social protection, and will also work toward formalizing employment. He also promised to protect agricultural land and help farmers, because “if there is one thing we have learned from this pandemic, it is that agriculture is security and independence.”

Speaking of the dialogue process with Serbia, which has been the focus of much international attention, he said there can’t be normalization of relations until Serbia recognizes the reality of Kosovo’s independence, apologizes and pays reparations for war damages. He also said that his government will sue Serbia in the International Court of Justice and will seek accountability for the remaining missing persons.

Representatives of opposition parties criticized what they said was a vague and unbudgeted “wish list,” as well as for failing to mention issues such as the Association of Serb Majority Municipalities which has once again been raised as a topic in recent months.

Some deputies also criticized VV for the urgent timing of the session, which was held with little formal notice.

The vote for the government took place in an extraordinary Assembly session on Monday evening, after the inaugural session of the new Assembly was held on Monday morning.

During the inaugural session, VV’s Glauk Konjufca was elected president of the Assembly, and thereby also became acting president of Kosovo. In his role as acting president, he subsequently nominated Kurti, as leader of the winning entity in February’s elections, to form a government.

VV’s request for an extraordinary Assembly session to be held later in the afternoon — on the grounds that there was an “institutional vacuum” — was granted by the newly elected Assembly Presidency.

All change at the top

During the morning’s inaugural session of the Assembly, Konjufca received 69 votes in favor and 33 against as he was elected president of the Assembly. 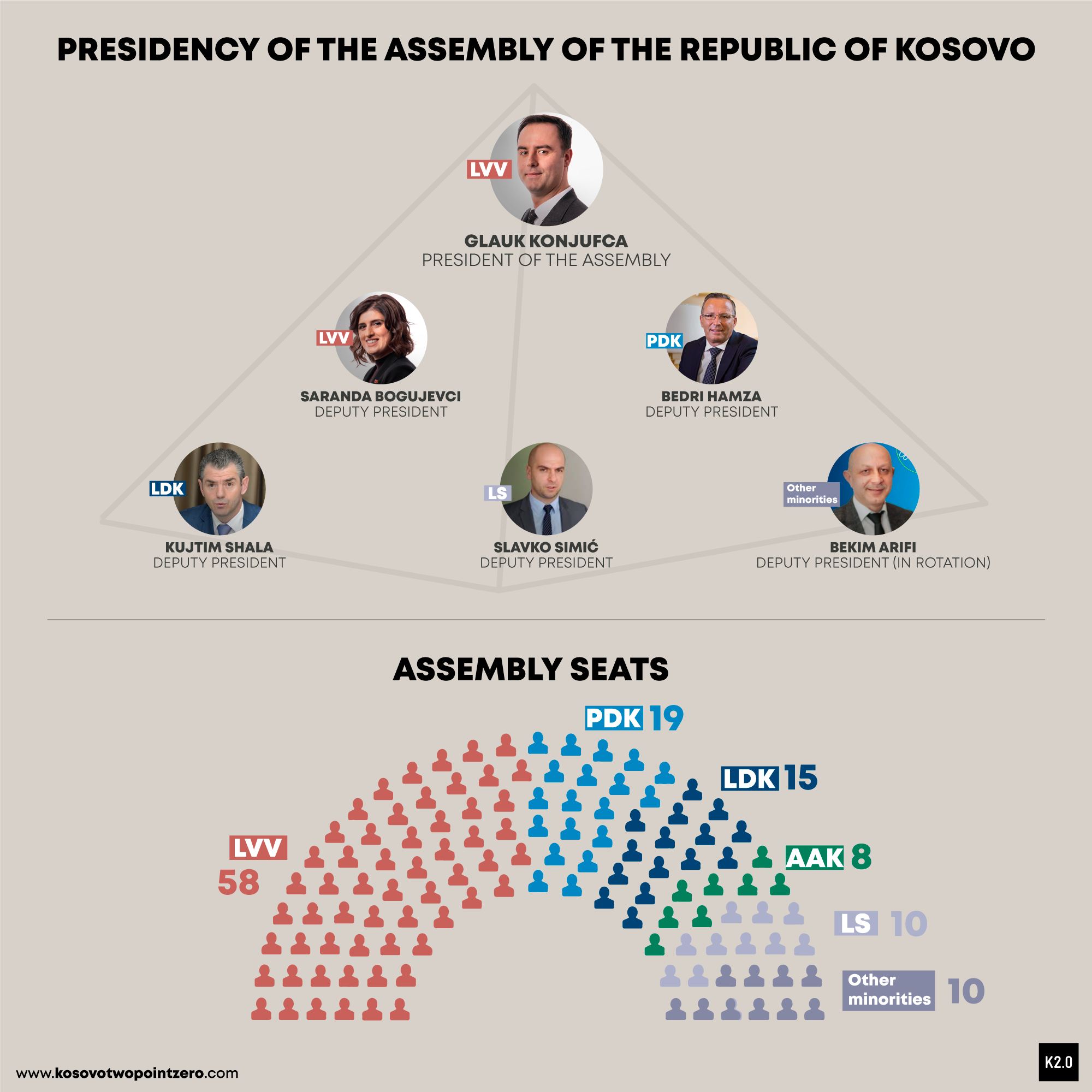 Konjufca takes over the Assembly’s top role from Vjosa Osmani, who had been in post for a little over a year. As president of the Assembly, she also automatically became acting president of Kosovo on November 5, 2020 when Hashim Thaçi resigned.

At the conclusion of the Inaugural Assembly session, Osmani and Konjufca met for a ceremonial handover in the president of the Assembly’s office, where Konjufca thanked Osmani for her work and commitment during her time in office.

“She has carried out the duty of acting president of Kosovo very responsibly, and is doing it until these moments, when she is transferring the responsibility to me,” he said. “Therefore, I am very honored that I am taking this responsibility from you, Mrs Osmani. You have set an excellent example in politics and everywhere.”

Osmani hopes to soon be elected for a full mandate as president of Kosovo after becoming by far the most voted deputy candidate in Kosovo’s electoral history last month having emphasized her intention to become head of state.

During the Inaugural session, the five new deputy presidents of the Assembly were also elected.

“I, Member of the Assembly of the Republic of Kosovo, swear that honestly and with devotion, shall carry out my duty and represent the people with dignity, shall work in the interest of Kosovo and all its citizens, shall be committed to protection and respect of the constitutionality and lawfulness, for protection of the territorial and institutional integrity of Kosovo, for guaranteeing human rights and freedoms, in accordance with the domestic laws and European standards. I swear!”

Saranda Bogujevci (VV), Bedri Hamza (Democratic Party of Kosovo, PDK) and Kujtim Shala (Democratic League of Kosovo, LDK) were elected to fill the three positions for Albanian representatives, while Slavko Simić (Srpska Lista) was re-elected as the Serb representative. The fifth position will be held on a rotational basis between the non-Serb minority parties, beginning with Bekim Arifi from the Ashkali Party for Integration (PAI).

Monday’s inaugural Assembly session officially marks the start of the four-year mandate of Kosovo’s eighth legislature. During the session, chaired by VV’s Avni Dehari as the oldest deputy, 114 of the 120 newly-elected deputies were sworn in. The deputies who were absent, as well as those who will replace deputies appointed as ministers, will take the solemn oath at the next Assembly session.

The newly constituted Assembly sees numerous new records being set. Its 43 women deputies are more than in any previous legislature, while a record 35 of them were elected without relying on support from the 30% gender quota.

VV has 58 deputies — more than any party in Kosovo’s electoral history — while PDK has 19 and LDK 15, their smallest ever representations. AAK has eight deputies, Srpska Lista 10 and the remaining 10 deputies are split between nine different entities representing other minority communities.

This article was originally published as a breaking news story and was added to on 22/03/21 after initially publishing.