Hashim Thaçi has announced his resignation as president of Kosovo after revealing that a war crimes indictment filed against him by the Specialist Prosecutor’s Office (SPO) in The Hague has been confirmed.

Thaçi told a press conference on Thursday (November 5) that he was resigning to protect the integrity of Kosovo. “As I promised, I will not allow the President of Kosovo to go in front of the court,” he said.

Thaçi, who has always strenuously denied the allegations against him, vowed to clear his name and urged a calm response. “This new situation is a new opportunity for Kosovo and we have to turn it into an advantage for today and the future of Kosovo, and this can be achieved by keeping political and civic unity,” he said.

Confirmation of Thaçi’s indictment by a pre-trial judge at the Kosovo Specialist Chambers follows confirmations of indictments against other high profile political figures in Kosovo in the past 24 hours, including Thaçi’s successor as head of the Democratic Party of Kosovo (PDK), Kadri Veseli.

The SPO revealed in June that indictments had been raised against Thaçi, Veseli and other leading members of the Kosovo Liberation Army (KLA) relating to “a range of crimes against humanity and war crimes, including murder, enforced disappearance of persons, persecution, and torture.”

What are the Kosovo Specialist Chambers?

Physically located in The Hague in the Netherlands, the Specialist Chambers operate under Kosovo law, although they are funded by the EU and staffed by international personnel. They are attached to each level of Kosovo’s court system, but have a specific mandate to investigate certain crimes committed during the Kosovo war in the period from January 1, 1998, to December 31, 2000.

Their jurisdiction covers crimes against humanity and war crimes under international law, as well as crimes under Kosovo law that relate to the “Dick Marty” report — these are alleged crimes committed by members of the KLA during and in the immediate aftermath of the war in Kosovo.

The Specialist Chambers has been a constant topic of discussion and controversy in Kosovo for years, and has long loomed large over Kosovo politics.

The judicial mechanism was formed under intense international pressure, and required changes to the Constitution and new legislation. Deputies approved the legal changes in August 2015, months after initially rejecting them, but it took another two years to get the Chambers up and running.

Veseli, former head of the Kosovo Intelligence Service (ShIK), released a statement on Thursday morning announcing that he was standing back from all “public and political activities for the duration of this process” after confirmation of his indictment by the Specialist Chambers. The former president of the Kosovo Assembly said he fully respected the jurisdiction of the court and would be traveling voluntarily to The Hague to “finally respond to these false suspicions and rumors.”

On Wednesday, Jakup Krasniqi — former member and spokesperson of the KLA headquarters, and later president of the Kosovo Assembly — was arrested during a raid of his home in Prishtina. The SPO released a statement confirming Krasniqi’s arrest, adding that he had been “transferred to the Detention Facilities of the Kosovo Specialist Chambers (KSC) in The Hague.”

Rexhep Selimi — another former member of the KLA headquarters and current head of Vetëvendosje’s parliamentary group — revealed on Wednesday that he had been notified that an indictment against him had been confirmed. Selimi said he would voluntarily travel to The Hague to face the charges and would return to Kosovo with his “head held high.”

Thaçi’s 5-year term as president of Kosovo was due to end in April 2021, but after the charges against him were made public in June he promised to “immediately resign” if they were confirmed. 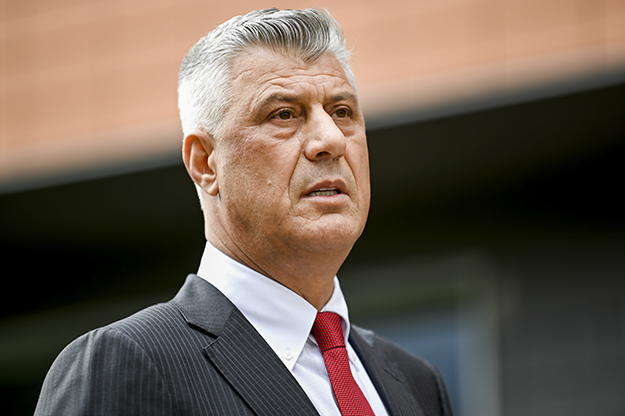 Following Thaçi’s resignation, Kosovo’s government released a short statement noting that “the constitution and the laws in force guarantee a clear transition of the exercise of responsibilities without creating an institutional vacuum.”

Vjosa Osmani attended a handover ceremony at the Presidency on Thursday afternoon.

According to Kosovo’s constitutional framework, the president’s resignation means that the president of the Kosovo Assembly — in this case, Vjosa Osmani — becomes acting president.

Osmani attended a handover ceremony at the Presidency on Thursday afternoon and is due to speak to the media later in the day.

She has previously stated that she would be confident of fulfilling the constitutional duties required of her if required to become acting president. “There would be no problem because my relations with political parties are many times more open than those of Thaçi,” she told KTV’s Desku program on October 13.

Article 90 of Kosovo’s Constitution states that the position of acting president may not be exercised for more than six months.

Qorrolli says that during this period, the Assembly should elect a new president. According to Article 86 of the Constitution, the president is elected with a two-thirds of the majority of all Assembly deputies.

“If within these six months the new president couldn’t be elected, then automatically we go to general elections,” Qorrolli said.K