Kosovo must not reproduce an exclusive narrative towards migrants.

In brief conversation with residents on the way to the asylum center in the village of Magure, Lipjan, it was not uncommon to hear expressions of solidarity like, “I have lived in another country for a long time, so I empathize with migrants,” or, ”they came here because they are in trouble, their country is at war.”

Participating in large waves of emigration since the ‘70s, many Kosovars are well acquainted with the experience of being a migrant. Either on a personal level, having been migrants themselves, or through the experience of relatives, Kosovars know what it means to search for a safer, more dignified life, to have to flee your home in search of a place that seemed from afar to offer them a better life.

These stories, similar to those shared by the inhabitants of Magure, hold within themselves a mixture of longing, pain, and often the feeling of being strangers, being excluded. Beyond mere personal experiences, these conversations, often just passing small talk, are an indication of how migrants are treated and received in countries that for them were once the only hope for a better life, for a new home without war. Elsewhere, but especially in our context, these stories should be read and understood as a call and reminder for genuine efforts not to reproduce the pain and exclusion previously faced by people we know and love, but to end it and pave the way for a new narrative for migrants, precisely by leading this change ourselves.

While the experiences of Kosovars as migrants cannot be separated from our daily lives, Kosovars’ hospitality is being tested by those who are arriving in Kosovo, people searching for a better life and to be freed from wars, political persecution, conflicts and poverty in their countries of origin. While the past experiences of Kosovars as migrants and refugees cannot be undone, a joint effort can be a new window of acceptance so that at least the people seeking refuge in Kosovo do not live with similar experiences and memories.

These stories should be read and understood as a call and reminder for genuine efforts not to reproduce the pain and exclusion, but to end it and pave the way for a new narrative for migrants.

In recent years, the number of asylum seekers in Kosovo has increased. Asylum seekers have the right to be treated with dignity and in accordance with human rights laws and principles. More specifically, in Kosovo, the rights of asylum seekers are guaranteed through the Law on Asylum, which is in line with successive directives that essentially seek to protect migrants and asylum seekers from human rights violations. However, it appears that institutions with the primary responsibility for ensuring that asylum seekers enjoy their rights, including the Kosovo police, asylum centers and other institutions, are stuck between old and new challenges in the face of this influx.

The center in Magure has been active since 2009, and in 2018 two other facilities were opened, one in Shipol, Mitrovica and another Vranidoll, Prishtina.

According to Fitim Zariqi, the Magure center’s director, there are currently about 100 asylum seekers who are sheltered there. The countries from which applicants come are mainly Afghanistan, Syria, Morocco, Palestine, Libya and other countries in war, conflict, or poverty. From interviews with asylum seekers in Kosovo, Zariqi says that “Kosovo is mainly used only as a transit country to move to countries like Germany.” 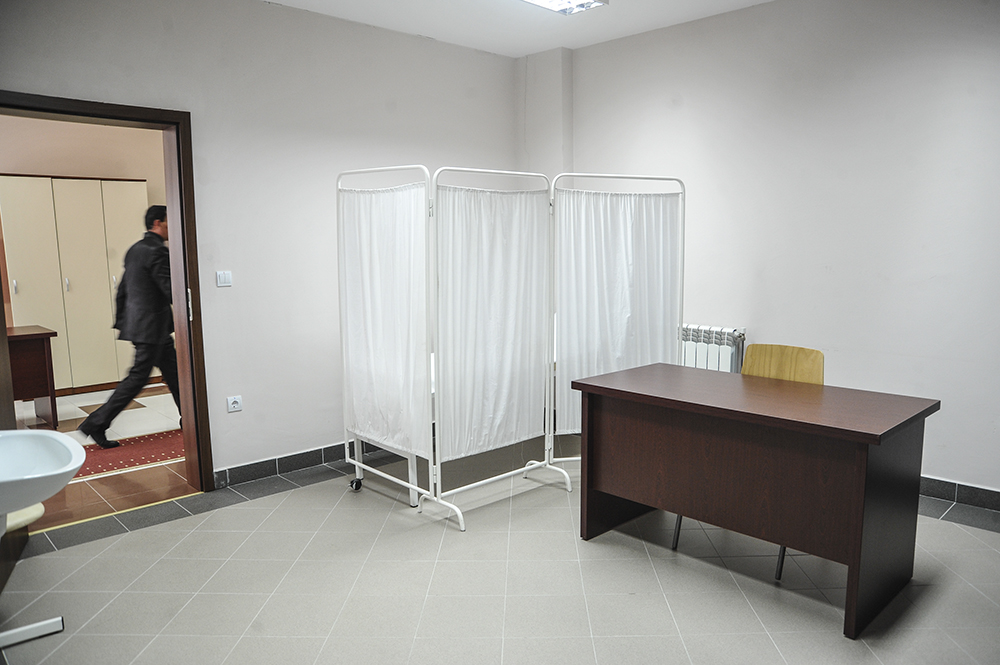 While the residents I came across speak to asylum seekers as fellow villagers with whom they coexist like everyone else there, the shelter obviously bears no resemblance at all to that of other residents of the village of Magure. The asylum center immediately stands out for its high walls, security cameras and metal fences, which cover the building on all sides.

Those who are described as fellow villagers by some residents of Magure are often seen as foreigners and undesirable by others in Kosovo, including the media, which instead of conveying a sense of solidarity does the opposite.

In November 2020 a video was released of a group of migrants being thrown out of a coffee shop in Prishtina. The news, which did not provide any explanation other than the origin of the migrants, prompted a host of comments expressing prejudice and hatred towards them. There is also media content in which statistics on asylum seekers in Kosovo are stated and then quickly followed by news of incidents allegedly caused by the migrants in the city, a framing which in essence encourages society to reject migrants.

Thus, Kosovo risks becoming part of anti-migrant narratives, which may seem paradoxical if we recall the experiences of Kosovars in the past, or if we see their readiness to leave Kosovo in favor of Western countries. In this regard, a survey conducted by the Group for Legal and Political Studies (GLPS) in 2020 showed that as the years go by the number of Kosovars who are willing to leave Kosovo increases. In fact, according to GLPS comparisons, in 2020 the willingness to migrate has increased by 30%, meaning that over 48% of respondents have expressed a desire to leave Kosovo.

With half of the population of Kosovo wanting to leave, it is time to reflect on how those who use Kosovo as a path to a better life are treated.

With half of the population of Kosovo wanting to leave, it is time to reflect on how those who use Kosovo as a path to a better life are treated. Often referred to as a place of “hospitality,” it is time to nurture this perception with deeds. And this has not always happened. Society in Kosovo on various occasions has erupted in speech and exclusionary tendencies towards migrants. Consecutive news reports seem to be eager to blame migrants for various incidents occurring in the country.

Now, beyond the promises of institutions, the work should perhaps focus on civic awareness towards migrants’ rights, as well as the role the media can play in reducing hate speech against migrants through fair and forward-looking human rights reporting. This is not only because half of the population in Kosovo wants to leave the country or because we have experienced and continue to experience being migrants ourselves, but because migrants deserve protection and are entitled to enjoying their rights wherever they are.

Is the Dečani Monastery really endangered?