In my frequent trips to Belgrade during these 15 years, I never had any significant troubles. However, there have been awkward and unpleasant times, when travelling by bus with unknown people who unconsciously use the word “shiptar” when talking to each other, or when drinking coffee at a café while speaking in a rather poor Serbian and you see people looking up at you with suspicion, and similar cases.

However, the arrival at the Center for Cultural Decontamination (CZKD) of Borka Pavičević, which was usually the main reason for my trips, brought some kind of relief to me; it was that feeling of arriving in a space of comfort, safety, and freedom.

There, I have always felt free and safe. But I did not get that feeling of freedom and safety from the space as such, the surrounding walls or something else, I got it from Borka, even at the times when she may not have been there physically.

While entering the CZKD, starting from the backyard I would yell the humorous line towards her office on the second floor, in my broken Serbian: “Jeli imate drvo da secate ili neki odžak da čistite?” (do you have some logs or a chimney to clean?) after which she, smiling, would yell at me “čuti!” (shut up!) and she would amicably invite me in.

She would often tell me that she was planning to publish a book with all the emails I had sent to her, because due to my broken Serbian, she said it would turn into a very amusing book.

Borka was an amazing woman, maybe the most amazing person I have ever met in my life. She was extremely lovely, hospitable and friendly. But above all, she was a rare intellectual who fascinated you with her deep knowledge about theater, society and politics. And she was always ready to talk, explain and tell stories from the past.

Very often, she would forget that I didn’t know the stories from before 2000 that she was referring to, and I had no way of knowing the names she was mentioning. Then, she would patiently explain them to me, piece after piece, story after story, name after name — about the Yugoslav avant-garde theater, the Bitef festival and all the famous names of the international theater who went there, she would tell me about her job as a playwright at Atelier 212 and the other theaters throughout former Yugoslavia.

She was the castle that the nationalists and fascists of all languages and religions could never conquer.  This is due to the fact that she was a charismatic, brave, uncompromising and determined woman. She was determined to never give up her causes of freedom, human dignity, of the freedom and dignity of those who were denied freedom and dignity, or from whom it was taken and who were mistreated.

She even made her CZKD in this way: a free space, a kind of extraterritoriality in which everybody was welcomed, the small, those who were different from the majority, those without a voice, those who were despised, those who resisted the power in place, Albanians, Bosnians…

The exhibitions that would be burned elsewhere in Serbia occupied a space there, there were told stories and topics were discussed for which you would be sent to jail elsewhere else in Serbia or could even get you killed, the power was ridiculed, it was  the place where victims of violence, fascism, and hate were lamented and mourned.

The memory of the region’s tragic past and the struggle for these experiences never to be repeated again were always there, like earrings in an ear. 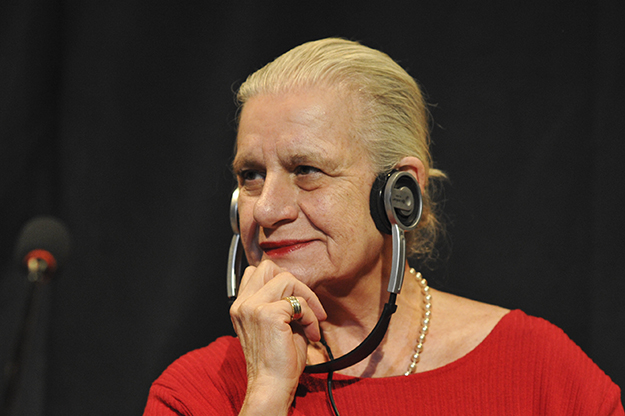 Borka was always there, at the CZKD.

One time in Belgrade, while we were drinking coffee in one of the cafés close to the CZKD, somebody passed by and when he saw her, he started shouting abuse at her and insulting her: “witch,” “traitor,” “sell-out,” “we will fuck your mother,” and so on.

I was impressed by how dismissive Borka was about it. She didn’t even bother to turn her head and look at the guy who was offending her. She continued talking, unbothered: undoubtedly, she was used to stupid incidents of this nature.

During all these years, we often met in Vienna, Tirana and Prishtina, but most frequently in Belgrade. We worked together on many regional artistic projects,  through the CZKD or individually, such as the play “The demolition of the Eiffel Tower,” on which she worked as a dramaturg.

And when one talks about the Albanian-Serbian cultural cooperation, Borka and her CZKD were on the front lines, instigators and main promoters. When I would jokingly tell her that the CZKD is like a ‘cultural embassy’ of Kosovo in Belgrade, Borka would get very happy. She would extremely happy when we would take our plays there, when the audience showed up and when there was an interest from the media.

And we showed all our plays there. When those from the Bitef theater didn’t want us, or when the Yugoslav Drama Theater didn’t answer, the CZKD was there. Borka was there to tell us that we are always welcome. And all those 15 years of cooperation and cultural exchange have been like this.

The powers in Serbia have changed, the political circumstances have sometimes been easier or more complicated, our arrival in Serbia with some play or other cultural activity has sometimes been easy and sometimes more difficult. But Borka’s enthusiasm and desire to welcome us has never changed, despite everything else.

Serbia is mourning, as Eugene O’Neill would say. But Borka Pavičević’s death is a great loss not only for Serbia, to which she has given the biggest service as an artist and activist, but for the entire region.

Because with her work as a dramaturg, as an uncontested theatrical authority, as an activist and as a humanitarian, she has contributed to the cultural scene, the human rights and to the social and political emancipation in all of ex-Yugoslavia. She has contributed by being Borka Pavičević, an institution by herself.

Borka Pavičević doesn’t live anymore and I just cannot believe this. I don’t know how I will be able to again enter into the backyard of the CZKD, knowing that Borka will no longer be there. It is going to be hard.

But it is going to be hard for many others from Kosovo, for Shkëlzen Maliqi certainly,  whom she loved and had a high opinion of, for Kushtrim and the others of the Mirëdita-Dobardan festival, for Veton Surroi whose novel she promoted, for Gjergj Prevazi who worked there, for Bajrush Mjaku, Alban Ukaj, Adrian Morina and Shengyl Ismaili who played there, for the Kosovo 2.0 team who together sat up the exhibition “Përtej” and for too many others, thousands of artists and activists from Kosovo and tens and thousands of others from Croatia, Bosnia and Herzegovina, North Macedonia, and lots of other countries.

Borka Pavičević is not here anymore, but she left behind her an incredible heritage of knowledge, vision for the future and faith in love and in change. Her life and her work are an inspiration for many of us. For me personally, undoubtedly.

Borka Pavičević was a dramaturg, activist, columnist and the founder of the Center for Cultural Decontamination in Belgrade. She was born in 1947, in Kotor, Montenegro. After finishing her dramaturgy studies in Belgrade, she worked for 10 years as a playwright at Atelier 212 and then in the BITEF theater. She was also a dramaturg in different theaters in former Yugoslavia.

In 1981 she founded Nova Osećajnost (New Sensitivity) in the beer factory in Belgrade. She was also the art director of the Belgrade Drama Theater, but was removed from that position in 1993 due to her political and public activity. She was a participant of the Civil Resistance Movement (1991) and participated in numerous anti-war protests and actions in Belgrade and other ex-Yugoslav cities.

She also worked as a columnist for the magazine “Susret” and “Vreme” and the daily newspaper Danas. She was the director of the Center for Cultural Decontamination in Belgrade since 1994.