A review of political art in a film.

Director Blerta Zeqiri, producer Kreshnik Berisha and their cast of actors managed to make one of the best feature films of recent times. A co-production of BunkerFilm, the Kosovo Cinematography Center and the National Cinematography Center of Albania, “Martesa” (“Marriage”) is unique in the fact that its director carefully and skillfully managed to encounter two contradictory realities that go beyond Kosovo and reflect on the dishonest coexistence of societies in the Balkans: The internal reality and the external reality, extended in two different periods of time.

“Martesa” is not (just) a film about the LGBT community. In fact, such a claim would downplay the film’s level of elasticity. Firstly, it is a film about societies that have bad outdated traditions, in which patriarchy prevails, about weak countries that do not protect the individual and do not embrace him or her either. The main conflict within the piece is not the forbidden love between two people — in this case, between two men who have known each other for quite a while — it is rather the hypocrisy and violence of a whole system of society. 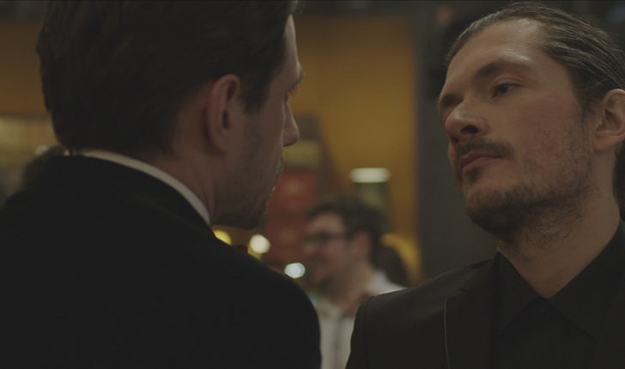 Bekim (Alban Ukaj), a young man who is soon to marry Anita (Adriana Matoshi), a woman he met in the bar he runs on a joyful night of drinking and flirting. Everything had to go in accordance with the cliché characteristics of organizing a wedding for the couple: the white dress, the guest list, the anxiety of selecting furniture for the new house, up until Noli (Genc Salihu) appears. Noli, Bekim’s former lover and friend, confirms that he still loves him, despite having been apart for years. He disturbs the waters.

Bekim is concerned about how his family and society would react upon learning about his sexual identity. But above all, he fears himself. Thus he chooses to hide and oppress his feelings, embracing a model of masculinity which he is not: independent, open-minded, heterosexual, modern and free. He chooses security before freedom, despair and comfort before love, fear before courage, submission before human dignity and conformity before happiness; unlike Noli, who is prepared to be spat on and kicked in the street for not compromising his dignity as a man and human.

Zeqiri manages to unfold the social complexity of a society in one frame: 10 years after the war, everything has mostly gone in the right direction for our protagonists. They have food on the table, they are not threatened when they leave their house to go places, no one threatens them with guns… Now they are violated only by themselves.

The external war is substituted with internal wars. Ironic, but also just as interesting, is Noli’s assertion to Bekim as they hug in spring 1999, a time when houses are being blown away and Albanians are leaving their homes en masse. He says that he is happy, despite the circumstances in which their happiness has come about. In fact, it makes him feel guilty, because reason dictates that happiness cannot exist in parallel with war, because war causes fear and death. But as a result of war, he finds Shelter in Bekim’s arms, proving that there is light even in darkness, and that this light is not wrong by any means. Love is not wrong. Desecrating and hating it is.

History has taught us that love is stronger than hatred, and that it can unite in a better and more just way. It makes space for everyone.

With an intelligent sense of irony, Zeqiri manages to homogenize the patriarchal mentality that is rooted in the Balkans, when Noli states that the only thing that can bring Serbs and Albanians together in those conditions is their hate for people like them, namely their hate for gay people. Bekim confirms this. He sighs and says that in times of war and peace, even his mother, the person who made him, would react violently against him. This honest dialogue is the key to the whole film: It is the artistic crack in the nationalist and patriarchal wall.

From this point, the film is no longer a cinematographic drama. It now has newfound responsibilities. Directly, it becomes a piece of educational and political material. History has taught us that love is stronger than hatred, and that it can unite in a better and more just way. It makes space for everyone.

These days, countries like Kosovo, Serbia and Albania, aim to join the European family, despite its crises. They believe that unification not only produces tolerance and peace, but also creates more opportunities for solving issues together more quickly, because the future is for everyone, and as such it cannot be denied to anyone. Kosovo and Serbia, despite their unresolved issues, are no longer at war with each other. Rather they are at war with their internal social values.

Now we have a common war against systems that extort and governments that are greedy and do not care about us, despite our sexual orientation, or the beliefs that we have chosen to follow, or our civility. The differences we have with our governments are bigger and more serious than the inexistent difference that we claim exists between us.

As such, “Martesa” can be seen as an invitation to analyze ourselves, to learn that there are more things that unite a homosexual and heterosexual man, be they Albanians or Serbs, than there are things that divide them. Now we have a common war against systems that extort and governments that are greedy and do not care about us, despite our sexual orientation, or the beliefs that we have chosen to follow, or our civility. The differences we have with our governments are bigger and more serious than the inexistent difference that we claim exists between us.

In this prism, the past and the war have no narrative influence on the film, which helps us to understand the dynamics of the relations between the subjects. But they play a unique symbolic role, in which the objective is to understand current times by analyzing the past (the remains of Anita’s murdered parents are yet to be sent to her home, which reminds us that we cannot progress without treating the wounds of our past).

Moreover, the film is full of symbolic elements that confront the audience’s humane side, making it more empathetic, as it is oriented toward the real issue: the culture of violence and institutionalized injustice. When Noli finds himself in the city commissariat, the policemen pretend not to hear the men that use hate speech against them, because in the Balkans, violence is started from the state, then it extends to all social structures — a domino effect.

He goes to his wife in handcuffs, but in reality he is chained by society’s invisible chains of fear.

Moreover, there are other irritant visual elements, such as when Bekim — who had briefly left the wedding to take Nol home — is brought back in handcuffs, after the city police decide to accompany him there to confirm that he had not lied to them in the statement he had given when detained for going over the speed limit, particularly on that day. He goes to his wife in handcuffs, but in reality he is chained by society’s invisible chains of fear. This marriage is the hypocritical veil of his life, which he has removed by lying to himself and others, with the illusion that these conditions would protect him. What protection can lies give you? They do not protect; they simply delay the destruction and make it more intense. 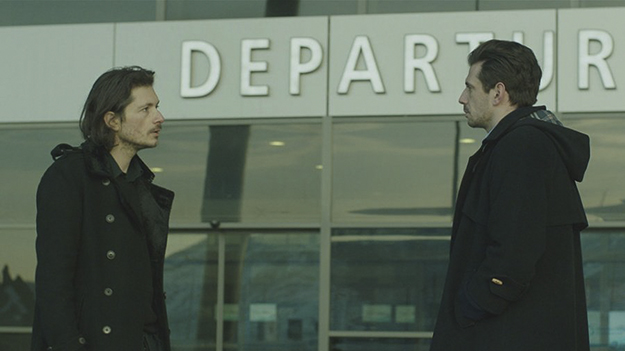 On the other hand, Anita’s vintage dress, which she also wears during her adolescent years, can be seen not only as a dress that has been adopted because of the aesthetic of the 21st century style, or as a soulful bond between mother and daughter, but also as an unbroken bridge that connects her to traditions. Similarly, the dress brings them to current times, holds the unbroken threads that connect them to the (un)broken norms of the past, in which the role of a woman related to marriage — a role of serving the husband and having children.

If I were to critique the film, I would do so for leaving Anita in the margins and for not focusing enough on her position, in the role that she represents: She is marrying a man that does not love her, who is using this marriage in an egotistical way, to fix his public image. Anita and Noli are on a boat, but they are both losers in an unjust battle, before Bekim. This serves to analyze the position of women, without excluding LGBT people, in our societies — patriarchy affects and damages all of them in a unique way.

There is no recipe for change. We achieve change by asking questions. That is particularly where “Martesa” strikes.

But the film manages to reflect on how our characters are emancipated only on the surface, as is society as a whole. They are allowed to be modern, in moderation. This means that they have the opportunity to fantasize or provoke freedom, but not to embrace it. Their emancipation must not challenge archaic norms that go against humans. Every step beyond this vortex is accompanied with evil gossip and harsh perspectives that degrade to animalistic encounters. Noli is our example of the value of freedom in these circumstances. He is right, free, but also bears the consequences of war for this freedom.

“Martesa” is above all a completely original film. The nature of communication between the characters is what makes Genc Salihu stand out in his first performance as an actor. He is excellent. But it is all a result of his cooperation with the talented and dedicated Matoshi and Ukaj. The way they play and the care they show for their characters, the history and the issue itself, an issue that they have been brave enough to transmit to Albanian and foreign audiences, is what crowns this marriage. This piece can stand as a deeply local product, not losing an inch of the universality that it maintains. It won two prestigious awards at the Tallinn International Film Festival (Estonia) and was nominated for three others.

Zeqiri does not offer solutions in the film. It remains a piece that describes actuality with striking honesty. This could be seen as limiting, but maybe from another perspective, it would simply be noble. There is no recipe for change. We achieve change by asking questions. That is particularly where “Martesa” strikes.

For example, the socio-economic level that our characters belong to inevitably leaves an impression. They represent a microborgouasie stratum. Economic security allows them to maneuver easily in life (Noli leaves to go to a more open-minded country, where he is not abused or despised like he is in Kosovo, or at least not to that extent. Meanwhile, Bekim has the opportunity to do the same or to continue living in Kosovo).

But what does it mean to be gay and poor in Kosovo (or Albania)? To not have the chance to escape a patriarchal family and the prevailing homophobia? To not be able to take a flight to escape when the situation becomes unbearable? “Martesa” does not offer solutions, rather it opens a constructive debate that seeks solutions.

Ultimately, this film helps us discern the common things more than the differences; it makes us ponder about our own social position, instead of our intimacy, and it leads us toward our humane side, which oppressive systems attempt to destroy. So I hope “Martesa” will be screened in universities, not only cinemas.