Nostalgia for a unified city

In January, a “Storytelling Caravan” was held in the southern part of the city of Mitrovica. The event, aimed at restoring memories of a city that was once unified, culturally and socially, was held at the Diakonie Youth Center, located near the River Ibër, which flows through the city and is now considered a symbol of its division.

As part of the Mitrovica Joint Stories project, organized by GAIA — a non-governmental organization that is a subsidiary of Service Civil International (SCI) — the event showcased the stories of three Mitrovica women of different ethnicities: Valbona Prekazi (Albanian), Jasmine Kurshumlija (Bosnian) and Ružica Simić (Serb). All three of them in their 50s and 60s, shared memories of their lives over the years, spent on two sides of the city.

Exhibited on the walls of the youth center, strung up behind the storytellers, were photographs of women from Mitrovica from a time when the city was unified. The photos were provided by the Mitrovica Museum, the local project partner.

During the event, the featured storytellers shared their earliest memories of the city. Reflecting upon their favorite places from earlier times, they spoke about how Mitrovica, years ago, differed from other cities regarding traditions and cultural life; it was the city of rock bands, parties, sports, economic and industrial development. Furthermore, they spoke about the role of women in the former society.

Despite living in the same city at a time of great cultural diversity, the memories of  Prekazi, Kurshumlija and Simić were unique to each woman. Still, these stories of the old city of Mitrovica were juxtaposed with a Mitrovica in oblivion, a divided city that hosts a completely different life today from that which was lived not long ago. 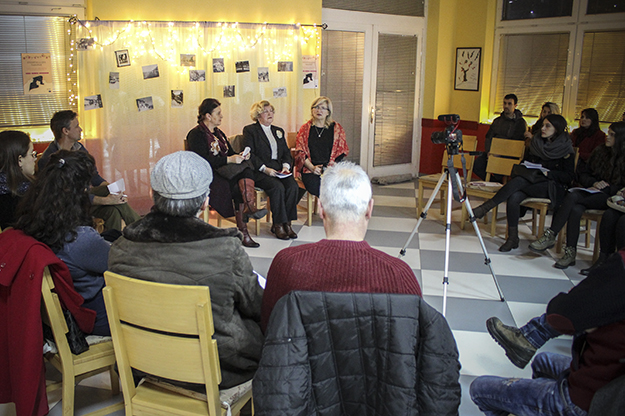 Valbona Prekazi, Jasmina Kurshumlija and Ružica Simić shared their memories of the city of Mitrovica. Photo courtesy of Besim Ibrahimi.

Valbona Prekazi, a professor in the city’s Technical High School, says one of her earliest memories of the city is that of her first impression when she and her family arrived in Mitrovica from Prizren in the ’60s.

“The sight of the River Ibër captivated us. It was vast and deep, and above it [there was] a glamorous metal bridge,” said Prekazi, who was particularly impressed by Mitrovica’s urban planning.

“In the middle of the city, there was a park. The park was outstandingly beautiful at the time. It had a pool in the middle, and lots of flowers and conifers around, through which light couldn’t penetrate.”

She recalled that, on Sundays, she would join tens of thousands of other spectators in the Trepça stadium on the northern side of the park to watch the match. “Trepça’s team was always renowned. It entered the first league of Yugoslavia,” she said, before continuing on to highlight Mitrovica’s industrial zone.

“We travelled by train, and around midnight, when we got to Mitrovica, we were fascinated by the lights seen from the entrance of the city, coming from the developed industrial zone,” she said.

“What impressed me the most was the illumination of the city,” Simić said. “Seeing that I come from Stantërg, a small place, I was impressed by the public lighting from the beginning of the city to the end, [at the River] Sitnica.”

The city of Mitrovica reminds Simić of a time when society was more unified and people socialized regardless of their background.

“The collective aspect was very important at the time,” she said. “We got together with other families and went out. We never cared about social background. We just wanted to go out and have fun.”

"At the time when I was in school, I remember that women professors were renowned and had great influence in the community.”

In addition to the public lighting, Prekazi and Simić were also enamoured by the women professors who taught them in school.

“Men mainly dominated higher positions: They were directors at Trepça [mining complex] and headmasters of schools,” Simić said. “But at the time when I was in school, I remember that women professors were renowned and had great influence in the community.”

Prekazi added that many women in different professions were very powerful at the time.

Moreover, the women recalled that cultural life was more alive in the past. For Prekazi, Mitrovica was an avant-garde city, with cultural nights, a dancing hall in Zveçan, discos, a ball for elderly people, and a matinee performance for young people.

“Mitrovica and Zveçan had four cinemas, a theater, and a city museum, which is still there today,” she said. “We had places where we could go out and have fun, spend a nice couple of hours.”

Like Prekazi and Simić, Jasmina Kurshumlija, a teacher at Bedri Gina primary school, recalled her childhood with nostalgia.

“Our childhood was, perhaps, much more active. At that time, I played a lot of sports. I was a basketball player. I played for Zveçan’s team, and later for Trepça. Sadly, today we don’t see young people taking part in sports activities too much,” said Kurshumlija, who also noted that there was a greater sense of community among neighbors at the time.

“I lived in a 10-storey building, and not only did I know every resident, I also knew their guests who would come to visit them,” she said.

The stories of these women provided a nostalgic image of Mitrovica, and a descriptive image for those who did not experience the city when it was united.

Mevlude Skuroshi, project coordinator of “Mitrovica Joint Stories,” spoke about the importance of the project; about how a city that was once very alive is now completely different, and the need to inform younger generations about the past. “We are organizing cultural events, with the objective of livening up the city and hearing about what happened before,” Skuroshi said.

Storytelling Caravan I: Women of Mitrovica was the first in a series of events that will be organized as part of the Mitrovica Joint Stories project, which will continue until May. Through storytelling, memory sharing and different activities, the events will juxtapose the city of Mitrovica with an image of the city as it was years ago.K