In February 1990, Ali Shabani, alongside hundreds of colleagues, attempted to turn up for work at the steel tubes factory known as IMK Celiku on the outskirts of Ferizaj. The workers were prevented from entering by police forces, as they were every day for the next two and a half months.

On February 27 the same year, 572 workers at the factory had their contracts terminated because they ‘had been absent from work for five consecutive days.’ The incident was one of many during a period in which the Serbian regime removed thousands of Kosovar Albanians from public employment.

The workers of IMK Celiku have been seeking justice ever since, with the fight continuing across eras, from the Serbian regime of the ’90s to the UNMIK administration up to contemporary, post-declaration of independence Kosovo. “We still have no access to the factory,” Shabani tells K2.0, smiling.

With the yearly interest, the workers were by now owed over 30 million euros.

The court battle began in 2001, with the Independent Union of Workers of IMK Steel Factory filing a claim in regard to their dismissal and the wages they missed out on between 1990 and the date the complaint was filed. The case was concluded a year later, with the Municipal Court of Ferizaj ordering IMK Celiku to reinstate the workers, adding that the workers should acquire all the rights for their employment from February 1990 to May 2001.

The Executive Board of IMK Celiku approved a request from the workers to execute the decision and reinstate the workers, while its financial branch calculated the compensation the workers were due. However, three years later the workers had still not received compensation and requested the Municipal Court to give an execution order for its judgement from 2002.

In December 2005, the court allowed the execution of its judgement — 912 workers were owed over 25.5 million euros with a yearly interest of 3 percent starting from 2002. It was a blow to the Kosovo Trust Agency (KTA), a body set up to enhance the value, viability, and corporate governance of socially owned and public enterprises, such as IMK Celiku, which it was seeking to privatize, but would struggle to do so with such a large outstanding debt. 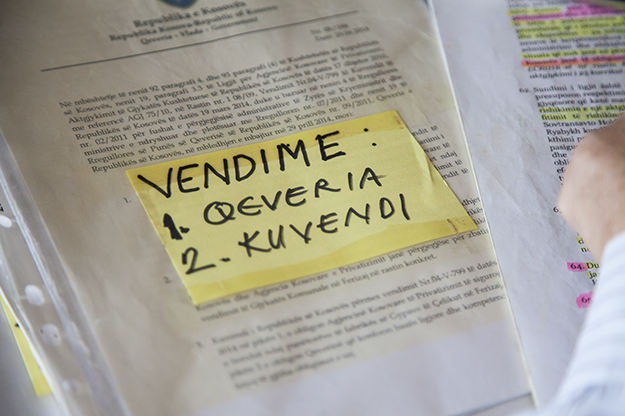 The case involving the IMK Celiku workers has been through a number of courts, with a decision on its rulings also having been taken by the Kosovo Assembly. Photo: Majlinda Hoxha / K2.0.

The execution order from the Municipal Court was initially accompanied by a decision to prohibit the privatization of IMK, though this decision was reversed the following month and the privatization would go ahead in 2007 through a special ‘spin-off’ process. In 2008, the Municipal Court of Ferizaj suspended the execution order of its 2002 judgement on the basis of the liquidation of the original IMK Celiku company.

The workers were not notified of this decision for nearly a year, at which point they soon referred it to the Constitutional Court. In December 2010, the court issued ruling nr. KI 08/09, upholding the workers’ referral and stating that the final and binding decision of the Municipal Court of Ferizaj from 2002 must be executed by the competent authorities, specifying in particular the Kosovo government and the Privatization Agency of Kosovo (as the legal successor to the KTA). With the yearly interest, the workers were by now owed over 30 million euros.

Three governments have come to power since the Constitutional Court’s ruling, but the workers, despite promises, have never received the compensation awarded to them by Kosovo’s legal institutions. K2.0 contacted the Privatization Agency of Kosovo to enquire what steps they had taken to fulfill their obligation but received no response.

The delay is taking its toll on the union of workers. “We are aging and dying without receiving justice and it is devastating to see some of my former colleagues looking for food in trash bins,” says Shabani, his eyes welling up with tears. 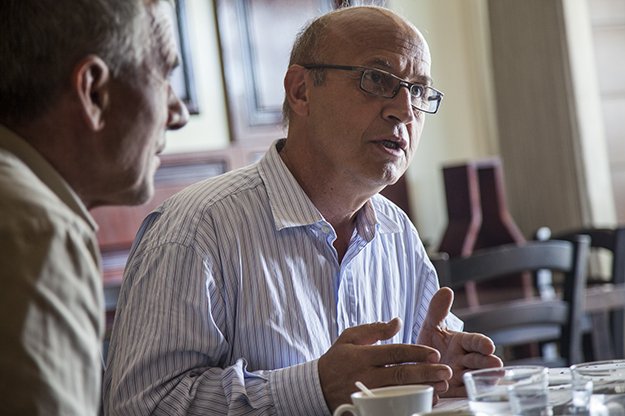 Ali Shabani is one of 912 workers yet to receive the compensation that they have been legally entitled to since 2002. Many of his former colleagues have died waiting. Photo: Majlinda Hoxha / K2.0.

In June 2016, 357 out of the 912 former workers of the factory had already died without receiving compensation. Since then, the number has only increased. Shabani says they have no track on those dying but deaths among the group are frequent. “Every week, we hear that someone has died,” he says. Families of deceased workers entitled to compensation will inherit that entitlement.

To draw attention to their cause, in 2014 the surviving workers erected a tent in Skanderbeg Square, in front of the Kosovo Government building. It stood for 643 days before being removed in February 2016 during the police operation to clear the protest camp set up by the political opposition in the days leading up to Hashim Thaçi’s election as President of Kosovo.

“Even the protests have become senseless as we have organized 135 protests, but now it’s hard even to convince the workers to join us because protest seems not to be an effective tool in our case,” Shabani says.

Equal before the law?

The fact that for eight years a Constitutional Court ruling has not been able to be executed seems to be an extraordinary failure of three Kosovo governments who have consistently spoken of fair treatment before the law and the functioning of the rule of law. For the former workers of IMK Celiku, equality before the law has become an empty phrase. “When they [politicians] say no one is above the law, they mean to also add ‘besides us,’” Shabani says.

Current Prime Minister Ramush Haradinaj addressed the situation early in his mandate, asking the Constitutional Court in September 2017 for further clarifications in regard to the implementation of its ruling. The Constitutional Court confirmed to K2.0 that it received Haradinaj’s letter and responded on January 24, 2018, but did not reveal further details — neither what was requested by Haradinaj nor the Court’s reply.

“Hashim Thaçi, Isa Mustafa and Ramush Haradinaj have all behaved against and above the Constitution.”

K2.0 has repeatedly contacted the Office of the Prime Minister to ascertain the content of Haradinaj’s letter and the reply of the Constitutional Court, but has not been given the requested access. Shabani also complains about the lack of access to information regarding the exchange of the letters. “The Constitutional Court is also violating our rights as it is not giving access to the document issued to the government, while the government is hiding it from us,” Shabani says. 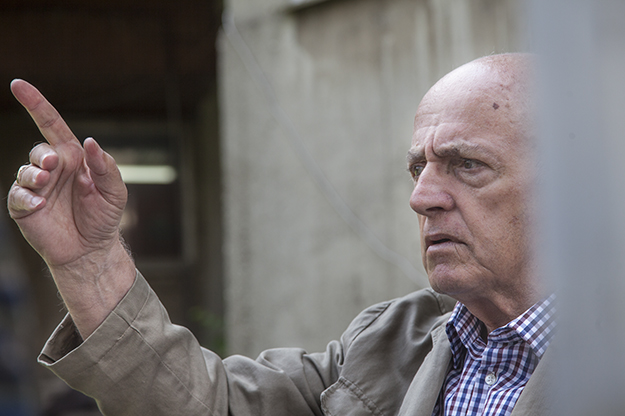 Riza Smaka is a member of Prime Minister Haradinaj’s AAK party, but believes its leader has made a mistake in not quickly enacting the decision of the Constitutional Court. Photo: Majlinda Hoxha / K2.0.

Riza Smaka is a constitutional expert and one of the 15 members of the commission that drafted Kosovo’s Constitution, as well as a member of Haradinaj’s political party, the Alliance for the Future of Kosovo (AAK). Despite his affiliation, Smaka does not believe Haradinaj should have contacted the Constitutional Court, saying that the ruling is binding and that it should be executed regardless of the financial consequences.

The three presiding prime ministers during the last eight years, Hashim Thaçi, Isa Mustafa and Ramush Haradinaj, have all reiterated that if the ruling for IMK Celiku were to be implemented, it could create a precedent for thousands of workers who were removed from their places of employment in the ’90s. They argue that were all to follow the same example, it would lead to the bankruptcy of the state.

“Now Haradinaj should call his financial adviser and find a way to implement the ruling.”

However, for Smaka this argument is not valid. “With the verdict and with the case won by the workers we already have a precedent,” he insists. “Now Haradinaj should call his financial adviser and find a way to implement the ruling.”

Those from the union say that the claim of the state’s bankruptcy are ridiculous and are simply an excuse. Shabani points to incidents in which the government has covered the debts of others, including for electricity bills for citizens in the north of Kosovo and debts totalling over 58 million euros owed by water companies to the state. When Haradinaj was asked why he took the decision to waive the debts of the water companies in December 2017, he responded: “Because I felt like it.”

For Shabani, this explains the nature of decision makers in Kosovo. “Look at this hypocrisy — the government pays for the debt that these individuals have, but does not pay the debt that is a constitutional obligation,” he states.

Some have also stated that Serbia should be held responsible for paying compensation for the events of the 1990s. Shabani is among these voices. “The issue of the workers removed from their jobs in the ’90s should be resolved in Brussels, by demanding war reparations from Serbia,” he says.

However, since the EU mediated dialogue between Kosovo and Serbia began in 2011, war reparations, pensions and other issues pertaining to the past have never been part of the discussions.

Who to turn to?

With the ruling remaining unimplemented for so long, it raises questions about who should enforce its conclusions. Smaka insists that the Constitutional Court should be more active and look for accountability from the institutions. “If the verdict is final and not able to be appealed, as in this case, the Court should demand an answer as to why it is not being executed,” he says. “In this way, the Court would also justify its existence.”

Additionally, Smaka insists that the lack of execution of the ruling unveils the weak functioning of the Kosovo Assembly. In March 2014, the Assembly backed the decision of the government, then led by Hashim Thaçi, to execute the ruling of the Constitutional Court, a decision that has still not been enacted.

“[The Assembly’s] decisions should be monitored as to whether they have been executed or not, and if they are not being respected additional measures should be taken in order to keep the government accountable,” Smaka adds. 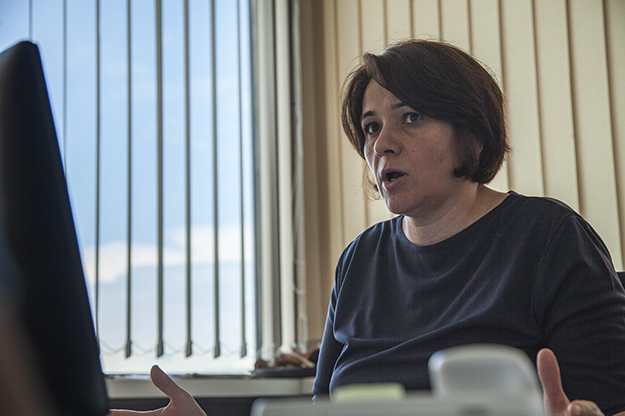 Suzana Gashi, director of the legal office of the Kosovo Ombudsperson, believes the lack of execution of the Constitutional Court’s rulings is a clear violation of the workers’ human rights. Photo: Majlinda Hoxha / K2.0.

The Constitutional Court’s judgement was in part based on violations of the European Convention on Human Rights, specifically Articles 6 and 13, which respectively give guarantees on the rights to a fair trial and an effective remedy. Suzana Gashi, the director of the legal office of the Kosovo Ombudsperson believes that the case has become a prime example of a violation of human rights, particularly the right to a fair trial.

However, international declarations of human rights are often hard to exercise for Kosovar citizens due to the state’s lack of membership in international organizations such as the Council of Europe, leaving the workers unable to take the case to the European Court of Human Rights. “Practically, the workers remain without any effective judicial tool,” Gashi says.

Kosovo’s government has spoken about a bid for membership of the Council of Europe in 2018 but has not set a date for the application to be submitted.

As for the workers, there is little optimism that these rights will ever be enacted. “It is a painful reality,” Shabani says, “but with these people in government, who lack ethical, human and legal sense, it is hard to believe that we will attain our legitimate and lawful rights.”K