Somewhere in Hungary, in a broad, cold and snowy field, Laco and Janko meet again after many years. Both are survivors of a Nazi concentration camp. Today, as adults, they stand in the field where once stood the camp in which they, together with their families, were kept as children. “Waiting for death,” as they put it.

Janko and Laco were persecuted because of their ethnicity; Janko is Romani and Laco Jewish. The Nazis considered these two communities as “inferior races” and as people that “must be eliminated.”

While recalling those times and mentioning the names of their family members, as well as the suffering that they experienced, Laco and Janko are enraged by the fact that no memorial exists to acknowledge the existence of that concentration camp in which many people were killed.

Speaking to one another, the two men recall the death count, with Laco highlighting that he was never able to distinguish whether the people inside the camp were Romani or Jewish. “They all experienced the same suffering,” he says.

“We must understand that during this period, this people was close to elimination.”

This is a sequence from the documentary film “A Hole in the Head,” which K2.0 attended the screening of during this year’s edition of DokuFest, alongside Roma poet and former deputy, Kujtim Pacaku.

Made by the Slovak independent director and producer Robert Kircchoff, it speaks about the persecution by the Nazis of Romani and Sinti people in Europe during World War II. An accurate death count from this community is unknown, but it is thought to have reached hundreds of thousands; in the documentary’s official synopsis, it is said that their tragedy went by in silence.

Kirchhoff, visited many countries in Europe, searching for Romani survivors of the Holocaust, who he calls “the ultimate living witnesses of the Holocaust.” On this journey, in addition to hearing first hand memories from survivors of the inhumane treatment they endured, he also found holes in their heads, which were inflicted upon them by Nazis; either during the cruel experiments which were conducted on them, or from the swastikas engraved on them with sharp objects.

This documentary was shot in Slovakia, the Czech Republic, Hungary, Serbia and Croatia, however the director refused to write the names of these countries during his sequences. After the DokuFest screening, he stated that he had done this deliberately. To him, countries are of no importance. Rather the experiences these people endured are crucial.

While the Holocaust against Jews has been widely condemned and memorialized since the end of World War II, the Romani Holocaust — the ‘Porajmos’ — has received much less international attention until recent years.

In April 2015, the European Parliament signed a resolution determining August 2 as the Memorial Day for the Nazi Genocide against Romani People during World War II. This date was recommended by different organizations that deal with the rights of Romani people, as it is connected to the atrocities that were committed on August 2 and 3, 1944 in Auschwitz, at the section called Zigeunerlager (the Romani camp); around 3,000 Roma men, women and children were murdered in gas chambers on those two days alone.

The Romani people who were protagonists of this documentary continuously reiterate just how little was said about their suffering and about the losses and casualties this community endured, suggesting that their suffering was disregarded.

The genocide against Romani people was not officially acknowledged by European countries up until recently. Only in 1979 did the Federal Parliament of West Germany identify that the persecution of Romani people was based on racial motives and it wasn’t until 2015 that the European Parliament dedicated a day to memorializing the Roma Holocaust, which is also known as Porajmos.

The theme of the “A Hole in the Head” is one that the Prizren poet Pacaku knows all too well and he has often written about the suffering of the Romani community during the Holocaust in his literary compositions.

Pacaku highlights that it is necessary to speak about this subject and sees the realization of this documentary from this perspective.

“There are many members of our community that do not have sufficient information about that period,” he said. “We must understand that during this period, this people was close to elimination.”

According to him, one of the reasons why there is a lack of information about this genocide is that the whole issue is seldom addressed in history books. He says that he is surprised at how an issue such as this — a people coming so close to elimination — could be insufficiently covered.

Pacaku believes that the silence that surrounds the suffering of Romani people during the Holocaust, as well as the absence of documentation in history books, comes as a result of the lack of political power that Romani people have in the societies in which they live.

According to him, Romani people have substituted this lack of learning about Porajmos in official history books with sharing anecdotes between relatives. “We have learned about the history of this suffering from our elders, as we did not find anything in books,” he says. “It is a history of fear that has followed this community ever since the war.” 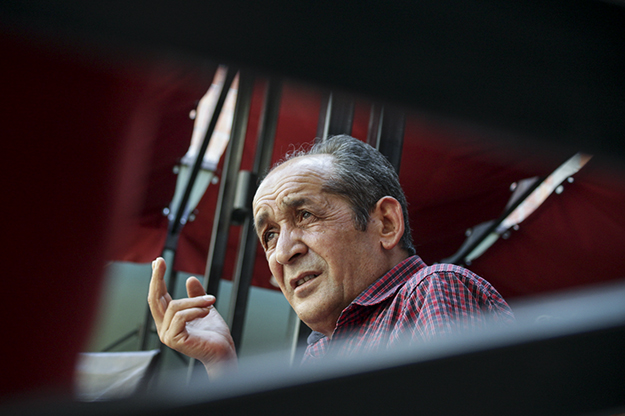 Pacaku criticizes Balkan countries, saying that in these societies there was insufficient attention directed towards the extermination of Romani people by Nazis. “In Kosovo we learn about the history of remote people, but not about Kosovo’s Romani people,” he says.

He highlights a story from Mitrovica, of Hajrie, a Romani woman who cared for Ester, a girl whose Jewish family disappeared. Hajria took in Ester and claimed that she was her daughter so as to protect her. She named her Miradije. After the end of the war, aged 14, Ester went to Israel to join her relatives who had escaped death.

In the early 1940s, the eight member Berisha family lived in the Bellaqefc i Madh village (today called Bardh i Madh), up until one of their sons, 13-year-old Rifat, was murdered by Nazi soldiers; the Nazis occupied Kosovo alongside Italian fascists from 1941 until 1943 and then alone until 1944. In conversation with K2.0, Ramiz, who today lives in Plemetina village near Obiliq, recalls the story of his uncle Rifat’s murder, a story that was told many times by his grandmother.

As the story goes, Rifat was a shepherd. He had gone out as usual to do his job in the fields, together with his fellow villagers. On that day, Nazi soldiers were also present in the village, and they attacked the people that were at the meadow. Many people died and were left injured as a result of the attack. Among the injured was also the 13 year-old-boy of the Berisha family.

Attempting to offer more details about the story, Ramiz says that the family later found out that the Nazis attacked when they saw that the people at the meadow had livestock, and as such they were seen as potential Partisan collaborators. 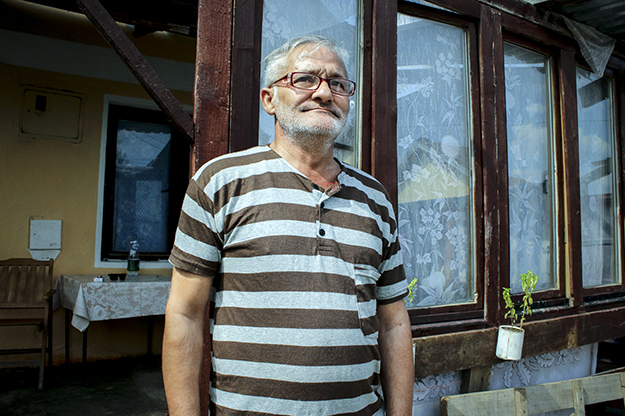 Ramiz Berisha says the story of his uncle’s death as a child at the hands of the Nazis has been a trauma to his family for decades. Photo: Agan Kosumi / K2.0.

After the attack, the shepherds that survived with injuries attempted to flee but were subsequently captured by the Nazis. At that point, the latter found out that they had not attacked Partisans, but rather minors and shepherds. The survivors were offered medical help by the Nazis, but Rifat did not have the same fate. He was executed with a bullet to the head, beside the river that runs through the village.

At the time, the Berisha family was the only Romani family that lived in Bellaqefc i Madh village. Recalling his grandmother’s words and attempting to explain the story further, Ramiz highlights that the other shepherds were either Albanian or Montenegrin.

Ramiz, who was born about two decades later, says that this event has haunted his family continuously, especially his grandmother who, up until 1988 when she passed away, repeatedly mentioned it: “Up until the end of her life she complained about hearing a ringing in her head,” he says, referring to the sound of the gunshot that took her son’s life.

“Romani people were not even worthy of being counted in death camps.”

Nevertheless, such events are still documented poorly, or not documented at all.

Kujtim Pacaku recalls other stories from Nazi concentration camps in the Balkans, such as that of a woman he had met in Croatia. She had said that when Romani people were sent to camps, Nazis would write down only the number of carriages — “Seven carriages with Romani people came today” — and not the number of people that were inside of them.

Pacaku says that from this we must understand that “Romani people were not even worthy of being counted in death camps.”

According to Pacaku, the silence that characterizes this tragedy also comes as a result of the role that Nazi puppet governments that were formed in countries that were invaded by the Nazis had in killing Romani people; under Nazi directives, these governments committed crimes against the Romani and Jewish communities.

The case of the Ustashi in Croatia is a typical example. Romani people were one of the communities that were most persecuted by this organization. According to Pacaku, this is another reason why governments did not talk about the killing of Romani people after the war. “No one wanted to include their national elements as part of these crimes,” Pacaku says. However, he says that the history of the Holocaust is an inherent part of the Romani community.

In the early ’70s, a Romani national renaissance occurred with the organization of the first World Roma Congress, held in London. It was there that, among other things, the Romani flag was decided upon, the acceptable and pejorative terms used for this community were agreed, and the Roma anthem “Djelem Djelem” was established. Pacaku says that this song was in fact written in a concentration camp close to Nis.

Even after World War II, Romani people remained one of the most persecuted communities, with prejudice continuing to be prevalent. Many years after the Porajmos, Romani people continue to fight for a dignified life, against poverty, and above all, against prejudice. K

Feature image: Screenshot from “A Hole in the Head.”