The Massacre of May 22 Street

Fatime and Musli’s story started similarly to those of many people their age. Forty-seven years ago they were introduced by relatives, and by the end of autumn 1972 they had decided to get married.

They agreed to create a family in the house they inherited from Musli’s father, which was located on Abdullah Shabani Street, not far from today’s Municipality of Vushtrri building.

Less than two years after getting married, Fatime and Musli Melenica had their first child, who they named Lutfi. In 1977, they had Shefki, and along the years came Avni, Arlinda and Florina. All five children grew up in that same house where the couple still live to this day.

Today though, the road bears another name, May 22 Street, a testament to the events that would change their lives forever.

Musli worked at the Education Directorate of the local municipality for many years and says that for him and Fatima, their children’s education was a priority. The first diploma in the household was acquired in 1989, when Lutfi graduated from the gymnasium.

But within less than two years, their joy would fade as Musli was fired from his job along with the majority of other Albanians who were working in Kosovo’s public institutions in the early ’90s and their dream of educating their children was thrown into jeopardy.

Around this time, Shefki started to study at the local gymnasium, where he stayed for four years before continuing his studies at the Economic Faculty of the University of Prishtina. By this time, lectures were being held in private homes as part of the parallel system of education, after Albanian students and professors had been expelled from state education structures.

During these years, Shefki’s brother and sisters continued their high school studies, also in the houses of local people.

Their 16-year-old neighbor Rrahim Shkreli went to the same school. He lived a bit further away, about 2 kilometers from May 22 Street, together with his parents, Xhemile and Hasan, his brother Bekim and his sisters Bukurie and Lirie.

Besides going to school, Rrahim occasionally went around the city’s cafés selling cigarettes, seeds, peanuts and Orbit chewing gum, which at the time was a luxury. 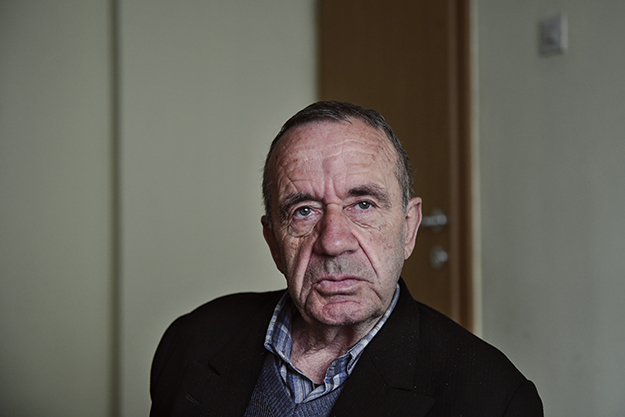 His father Hasan tells how he managed to keep his job as a security guard, but how his wage was low and often delayed, making life difficult for the family of six. So every penny that Rrahim brought home made it easier for the family to make a living.

Hasan’s eldest son Bekim was seeking opportunities to leave the country. His parents supported his idea, influenced by the fact that by 1998 the situation in Kosovo was rapidly deteriorating. But shortly after he left, and before the war hit Vushtrri directly, the Shkreli family was hit by tragedy. It was to be the first of many.

In the summer of ’98, Xhemile suffered a stroke, dying instantly. Months later, their daughter Lirie died of cancer at the age of 27.

Hasan would face this adversity with Rrahim, who was also hoping to soon leave Kosovo, and Bukurie; by this time, Bekim had already left for Germany, where Lutfi — Fatime and Musli’s eldest son — had migrated a while back.

As the Shkreli family mourned and the Melenica family worried about Shefki’s safety during his travels to study in Prishtina, Ajmane Ferati’s family was already face-to-face with the war on their doorstep. The household of 13 were thinking about leaving their home in Barë village after offensives from Serbian forces around nearby Mitrovica.

Ajmane fondly recalls her family’s life before these events. She remembers the time when they would sing and play the çifteli together with her older brother Driton, and the agricultural work that she would do with her parents and five sisters. She particularly recalls the birth of her younger brother Rrahman in 1981 because of the impact he would have on all their lives.

Ajmane remembers how Rrahman also liked the çifteli, and how his sisters would tease him and only let him play the def. She goes on to tell of Rrahman’s wish to go to Germany just before the start of the war, a wish that would never come true. 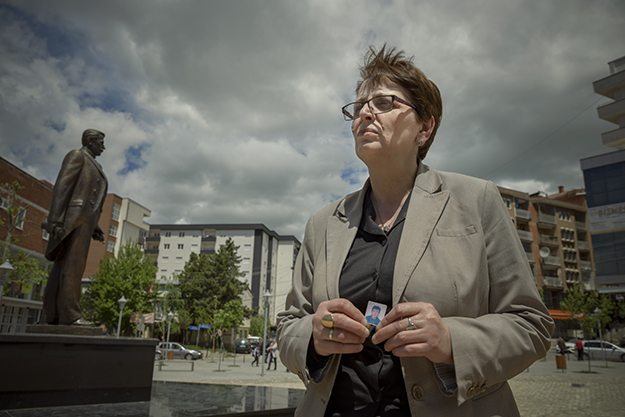 In October 1998, the family went to live in Vushtrri, a city familiar to Ajmane, who had finished high school there and had gone on to work in the city’s postal service for a few years. Ajmane recalls that in the next five months they changed house around 10 times before eventually, in April ’99, settling in the village of Studime on the edge of Vushtrri.

Although they came to Vushtrri to escape the war, their effort was to prove in vain.

A 2001 Human Rights Watch report highlights that Serbian forces had intensified their attacks around Vushtrri and Podujeva at this point and speaks of the “coordinated and systematic campaign to terrorize, kill, and expel the ethnic Albanians of Kosovo that was organized by the highest levels of the Serbian and Yugoslav governments in power at that time.”

On May 2, 1999 Studime and the surrounding villages were attacked by Serbian forces; 116 civilians were killed within a couple of hours.

Ajmane and her family managed to physically escape the May 2 massacre, although the scenes will forever be etched in her mind.

“We walked over bloody corpses,” says Ajmane as she recalls their escape from the village. “It would have been better if we had not survived.”

Together with hundreds of other survivors the family were forcibly marched to the facilities of the agricultural cooperative, which was located in the suburbs of Vushtrri.

“I regret saving him that day.”

They stayed for one night in the cooperative facilities then, in the morning, Serbian forces started to separate the men from the women and children. The men were beaten and taken away. Among them were Ajmane’s older brother Driton, her father and her uncle.

Witnessing these scenes and believing that they were going to be killed, she turned to Rrahman and got him to lie down and told her sisters and mother to sit on him so he could hide under them. Later, they learned that the men weren’t killed, but had been sent to the notorious Smerkonicë prison in Vushtrri.

“I regret saving him that day,” says Ajmane as she recalls what happened a little over two weeks later.

The women were ordered to leave the cooperative and go to the city center. Ajmane’s family and a few other families settled in an abandoned house, where other refugees would join them later on. They would not stay there long.

The house was attacked by paramilitary forces on May 5.

“This time they didn’t take the men [with them],” recalls Ajmane. “They beat us, robbed us, and left.”

Despite the paramilitaries leaving, the families didn’t feel safe staying there, so they went to seek shelter elsewhere and settled in a different house for another week.

“We didn’t have anything to eat and it was full of people, so we decided to leave,” Ajmane says.

“I’m going to uncle’s,” Rrahman had said, setting the course for the rest of the family.

The uncle’s house was on May 22 Street.

It was spring ’99 and Vushtrri had been besieged for a few months.

Hasan Shkreli and his two children had already been forcefully expelled from their own apartment and had lived for a few weeks in his brother’s home.

But around 9 a.m. on May 22, the order suddenly came to evacuate that place too.

Along with any others who hadn’t already left Vushtrri and who were found by Serbian forces that morning they were ordered to go to the city cemetery; witnesses thought at the time that anyone who was taken there would be killed.

Hasan and his children Bukurie and Rrahim found themselves herded with thousands of others along one of the main roads leading to the graveyard.

“I grabbed both of them by their hands, one on each side,” says Hasan, recalling what he calls “the road where the war caught up with us.”

That road was the one on which Musli Melenica and his family lived, sharing a common backyard with Musli’s three brothers. Dali Melenica’s house had been burnt down in an attack the previous month but due to the constant activity by Serbian police forces in the area, the family had been unable to leave the neighborhood.

Now, Musli, Fatime and their four children were ordered to join the row of people being directed to the graveyard where thousands were being held, surrounded by soldiers. With them were Musli’s three brothers with their own families.

But the road for them was too short.

Relatives tell how paramilitaries arbitrarily separated certain people from the crowd and took them to Kahrimon Pasoma’s house just 200 meters down the road from the Melenica house. 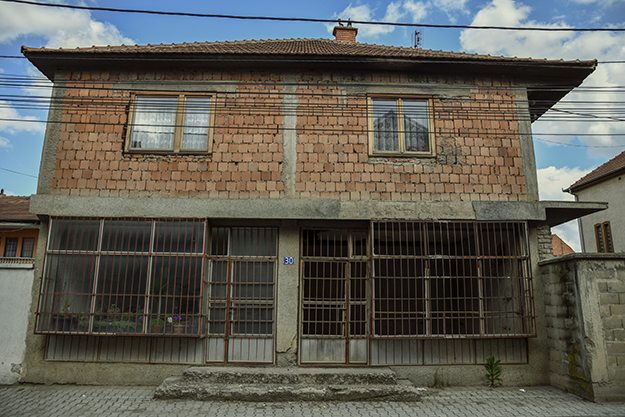 As people were marched toward Vushtrri’s graveyard on May 22, 1999, Serbian forces separated families at a checkpoint and forced some into the house belonging to Kahrimon Pasoma. Photo: Atdhe Mulla / K2.0.

The Melenica brothers’ sons were stopped at Kahrimon Pasoma’s house, while the rest were told to move on to the cemetery.

“Firstly they wanted to take my Avni,” recalls Musli. “Avni had some glasses on, so maybe he looked younger.”

But the Serbian forces took their other son, 22-year-old Shefki, as well as Musli’s three brothers and his brother’s son. Musli recalls how they beat and threatened their other relatives, and ordered them to move away.

Ajmane’s family, who had sought refuge on the street, was also stopped at Kahrimon Pasoma’s house. The Serbian forces took 18-year-old Rrahman.

When he got to Kahrimon Pasoma’s house, Hasan Shkreli found many youths and other familiar faces against the wall. They were putting them inside the house. He grabbed his children’s hands even more firmly and attempted to move forward, but the Serbian forces stopped them.

“They took them from my hands,” says Hasan, explaining the moment Bukurie and Rrahim were taken inside the house.

“I tried to push them, but they jumped on me, like wolves on a lamb,” he says, describing the desperate moment he tried to save his two children. They beat him and he was taken to the cemetery at gunpoint.

The three families stayed at the city cemetery for more than 10 hours, surrounded by Serbian forces, hoping to get their children back. 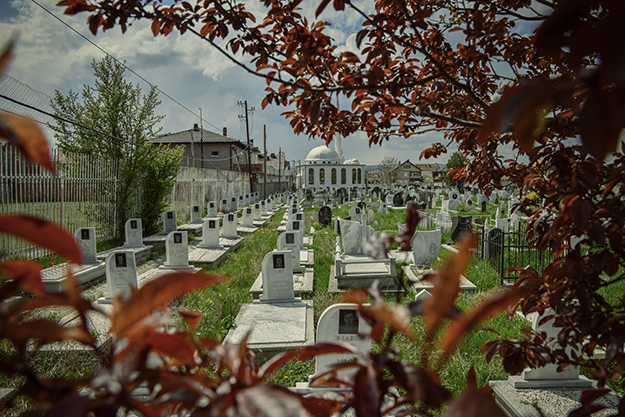 Thousands of people were held in Vushtrri’s graveyard on May 22, 1999. Today, the graveyard contains the bodies of dozens of those that were killed that day. Photo: Atdhe Mulla / K2.0.

But they would never see them alive again.

The remains of 67 of the 68 people killed in Kahrimon Pasoma’s house on May 22 Street in Vushtrri were found in a mass grave in Batajnica, Serbia. They were brought back to their families in Kosovo in the period between 2003 and 2012.

No court in Kosovo or Serbia has prosecuted the perpetrators of this massacre. Twenty years later, the Melenica, Shkreli and Ferati families all want to see justice brought to the perpetrators.

But Hasan Shkreli has an even more pressing demand: His daughter Bukurie’s body has yet to be found.