Time to review the textbooks

“The result is that the two brain types are connected in different ways: the male brain is for doing/making, and the female brain is for speaking.” This is just one of the discriminatory sentences that high school students in Kosovo read and learn from their 11th grade psychology textbook.

Sentences like this, which contain scientific inaccuracies and discriminatory, offensive and hate speech, were found in many school textbooks that the Ministry of Education, Science and Technology (MEST) agreed to use for the education of Kosovar students.

Concerns about this issue, as well as a risk assessment for the potential damage to the education of new generations in Kosovo, were recently summarized by the Youth Initiative for Human Rights (YIHR) in a report titled “Discriminatory Language in School Texts — Analysis of School Textbooks of the higher secondary level in Kosovo,” which was published on December 6.

Over 100 statements with discriminatory content were summarized in the report, which based its analysis on high school textbooks for subjects such as biology, civic education, history, psychology and sociology. According to YIHR’s findings, all of these textbooks contained discriminatory and exclusive language expressed on the basis of gender, ethnicity, sexual orientation, gender identity, and certain social groups.

YIHR’s findings also show that through the use of this language, school textbooks are inciting ethnic hatred, increasing the prevalence of prejudice and gender stereotypes, stigmatizing diverse family forms, confusing sexual identity with gender identity, using offensive terms when referring to people with disabilities, stigmatizing the poor, disseminating incorrect information and failing to cite sources.

For example, history textbooks use discriminatory and exclusive language based on ethnicity. In the 10th grade history textbook, one of the chapters teachers children about the 1999 war in Kosovo. The actions of Serbian forces are described as “…terror scenes of barbarity committed by blood-thirsty squadrons….” According to YIHR, these kind of sentences incite hatred and loathing among youth, which is the opposite of what transitional justice promotes. 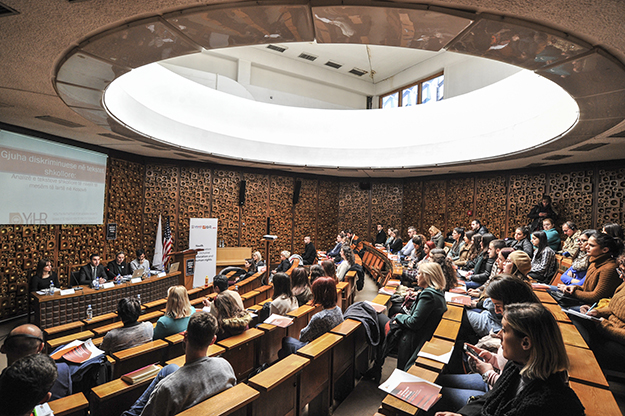 Furthermore, a figure of 15,000 victims is used in the context of this war, despite the fact that this figure is contested in various reports, which assert that the number of victims in the Kosovo war totalled over 8,000. Victims of minority communities are never mentioned; only Albanian victims. Additionally, the report notes the use of incorrect terms regarding ethnicity, nation and state, such as the use of the term “Yids” for Jews, or “Gypsy” for Roma — both of which are considered offensive terms.

YIHR found that discriminatory language is used on the basis of disabilities in the biology textbook. For example, Down Syndrome is described as “mongoloid idiocy,” another highly offensive term.

Psychology textbooks contain the terms “female” and “male,” not “woman” and “man,” thereby making no distinction between gender and sex. As part of the report, a survey was conducted with students. Its results show that they often have issues making distinctions between sex and gender, which is considered to be a consequence of inaccuracies within the textbooks that they use to learn. 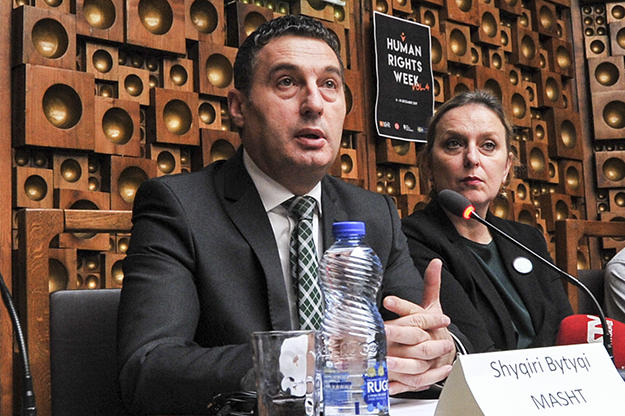 The minister of education, Shyqiri Bytyqi, has said that his ministry has taken the first steps in terms of reviewing school textbooks and has accepted that they contain discriminatory language and scientific inaccuracies. Photo: Atdhe Mulla / K2.0.

Shyqiri Bytyqi, the new minister of education, was present during the presentation of YIHR’s report about the content of school textbooks and admitted that many of the textbooks need revising “because they contain discriminatory words and sentences,” adding that students should not learn from these books any longer. Bytyqi also mentioned scientific inaccuracies that are prevalent in these texts, saying that this concern was raised within his ministry and that they are taking steps to solve this issue.

“Students will have new textbooks in the next academic year,” promised the minister. “These texts will be free from discriminatory and exclusive language, as well as scientific inaccuracies.” He also announced that the ministry has established a working group that includes representatives of NGOs, so that they can offer their professional expertise during the process of revising school textbooks.

MEST has also drafted an administrative order for reviewers, which will be used to assess school textbooks and  an open call will also be made for editing new textbooks.

Bytyqi said that new textbooks would be edited in accordance with European standards, and that they would also be based on Albania’s school textbooks.

According to YIHR, the errors and denigratory language that are prevalent in school textbooks, violate human rights that are guaranteed by national legislature and international conventions. University professor Vjollca Krasniqi believes that Kosovo’s education system has not managed to fulfil one of its main objective, which is to prioritize inclusiveness in education. 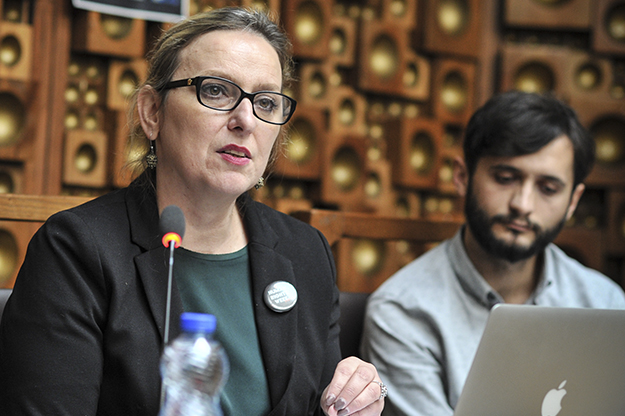 “The analysis conducted on school textbooks proves that this has not been achieved. We must develop the education system so that it encourages active citizenship, respects human rights and is inclusive,” she said during her speech as part of the panel that presented YIHR’s findings.

For Krasniqi, school textbooks discriminate in many cases, therefore are contrary to certain laws that are in force in Kosovo, such as the Law Against Discrimination and the Law for Gender Equality.

“History textbooks cause confusion about historical periods, contain incorrect dates, as well as other errors regarding figures.”

Nexhmije Mazrekaj, a history professor at the Ahmet Gashi gymnasium in Prishtina, does not agree that history books contain hate speech, but does admit that there are “exaggerations and an exclusion of other ethnicities.”

She told K2.0 that these exaggerations often result in inaccuracies. “History textbooks cause confusion about historical periods, contain incorrect dates, as well as other errors regarding figures,” she said, further explaining that she amends these dates or periods, asking children to write the correct information over the incorrect information in their textbooks. 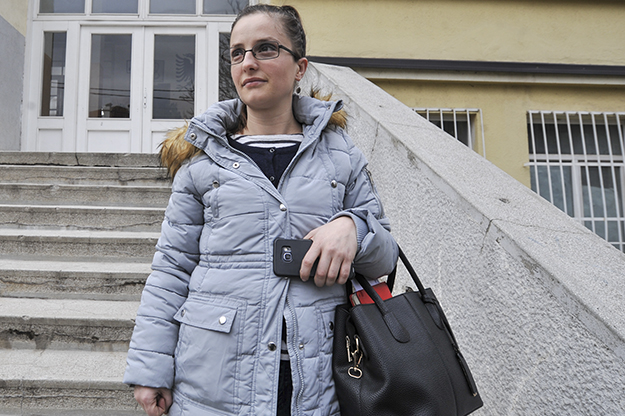 “We must keep in mind that history has national elements within it,” says Mazrekaj, further adding that the “national element” damages history as a science.

However, students build and base their knowledge and debate almost exclusively on school textbooks. Agon Rexhepi, a student at the Ahmet Gashi gymnasium told K2.0 that school textbooks are “our unit of measurement for the truth.”

According to Rexhepi, errors in school textbooks increase the possibility of misunderstanding information and the prevalence of discrimination. However, he also feels that there are issues related to teachers. If professors were better prepared, they would decrease the risk of repercussions as a consequence of errors in textbooks,” he says. 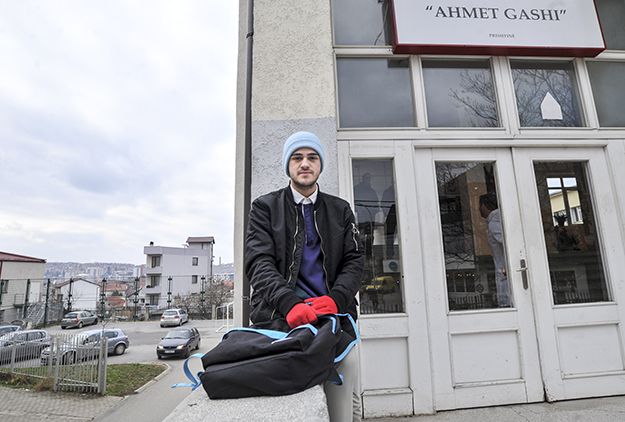 He mentions an example from his biology class, in which they learn about homosexuality as an illness, as set out in their textbooks. He said that when students reacted to contest this assertion, their professor said to them: “The book is correct, but I need to tell you that it is not, because [otherwise] the people from the ministry will rebuke us.”

The authors of the YIHR report provide a number of recommendations for MEST, publishing houses, teachers and parents.

Publishing houses are encouraged to follow the development of the education system and society, and to publish textbooks that are in accordance with contemporary education policies. They are also urged to create diverse teams of authors and professionals from different fields, who will write future textbooks.

Teachers are urged to assess school textbooks in a critical way, to identify parts of textbooks that contain prejudiced and discriminatory language and stereotypes and to substitute those parts with alternative sources. They are also implored to use methodology that encourages critical thinking among students.

If this is not achieved, then Kosovo’s students will continue to be a part of a system that should educate them, but that instead teaches them incorrect dates and invites them to use hate speech on the basis of ethnicity, gender or sexuality — to say the least… K