Will the government’s proposed plan to revive the economy work?

An unpaid electric bill was left on the table while Sali Fejza, the owner of a small fast food store in Prishtina, grew increasingly nervous discussing the financial problems caused by the pandemic and the lack of proper support from the government.

The 54-year-old had recently moved from Mitrovica together with his wife and a business partner to open ”’Leo & Mert,” a venture that they put their last dime into, hoping that when the summer came and the Kosovo diaspora flowed into the country for vacations, the investment would yield its results.

The pandemic effectively ruined every chance of this happening.

Now, after more than a month in total lockdown, the business is nearly dead, heavy bills have piled up, the pandemic’s end is nowhere in sight and the government appears to have surrendered to the situation.

Before the pandemic, Fejza says that the business was going well after investing around 20,000 euros and that he had managed to formally register eight people as workers, a list that included him, his wife and his business partner.

During the hour we spent talking, not one customer entered his shop, but various debt collectors asking for payments to be made didn't miss their appointments.

He says that he managed to pay every worker on time, including three students and a pregnant woman who have now paused their employment.

“The students cannot pay for their apartments anymore and have told me that they’re going back to their hometowns, with the university now also closed.”

The lockdown and the general struggle that the pandemic brought put a heavy burden on his venture, and the lack of support from the government didn’t help.

With his rent at 1,100 euros per month — that he also paid throughout the lockdown period — among other expenses and no income, Fejza saw his debts pile up quickly.

During the hour we spent talking, not one customer entered his shop, but various debt collectors asking for payments to be made didn’t miss their appointments — gas supply, window cleaning service …

Meanwhile, the electric bill now appeared to be staring at us — “959 euros not paid for the last four months,” Fejza said.

“I was at the KEDS offices today and begged them not to cut my energy supply,” Fejza says. Without electricity, his business would be paralyzed.

“I told them you can send me to jail, but you won’t close my business.”

A lifetime of work, little savings

Before venturing into Kosovo’s biggest city, Fejza used to work at what he could to make ends meet — pizzaman, making hamburgers, bodyguard.

During his decades as a worker, he says he has been paid regularly most of the time, although the salary was never enough to live a decent life. When asked about his contributions at the Trust, as Kosovo’s Pension Savings Fund is known, Fejza suddenly seems disconnected.

Prime Minister Avdullah Hoti’s Kosovo government has pushed a proposal forward to authorize the withdrawal of 10 percent of savings from the Kosovo Savings Fund for every person that wishes to do so, as part of the economic recovery measures, a move that has generated disagreement.

“I could probably get 100-200 euros … in these times of crisis maybe I would withdraw them,” Fejza says, while making it clear that he has no idea how much in savings he has accumulated over the years. 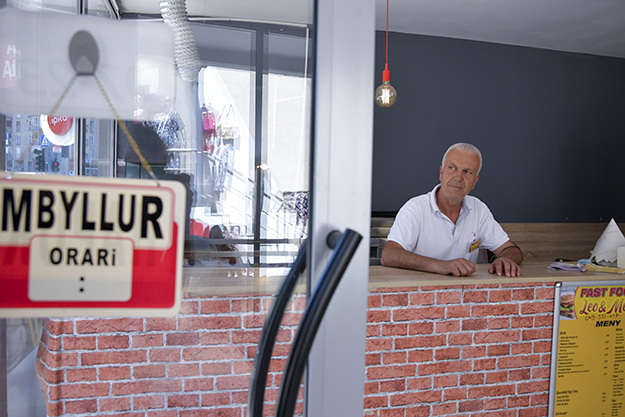 Sali Fejza’s business is at a breaking point but he does not know if it is worth it to take 10 percent of his savings from his Trust account to save it. Photo by Atdhe Mulla / K2.0.

With the business in tatters and lots of debt that he has no idea how he is going to manage to pay; a small sum from his own savings is far from enough.

“Our government is pitting us against each other over money, and now they say I can have my savings as aid?” Fejza said.

The government’s plan to authorize the early withdrawal of savings that are meant to be used when a person retires is seen as a good infusion for the economy in general. Those who oppose it say that this will benefit only citizens who are better off, particularly those who have managed to have regularly paying jobs and have seen their contributions paid together with their salary.

But, for most of the population, this has not been the case.

A high level of informality and irregular employment has seen people work for years in various jobs without contributions into the pension fund.

This means that many people who now need money more urgently than others would not benefit from their right to use their savings immediately, as 10% of their savings would not amount to any useful sum.

Hekuran Murati, a member of parliament from the opposition party Lëvizja Vetëvendosje, says that there are various problems with the initiative, but the main concerns are the break with the principle that the money should only be used in retirement, and the fact that the early withdrawal would not help the most fragile.

Murati says that the move would open the door for subsequent governments to do the same in the future when other difficult situations appear, as “the need for money will always be there.”

“I wouldn’t be surprised if other governments would repeat this in order to buy social peace, or during election years.”

Moreover, Murati claims that this move does not reach the supposed target, as only workers who have had good salaries have any substantial amount of savings, and most probably, they would not need the money from the Trust immediately, while others can only withdraw very little or don’t have any savings at all.

“It can be said for sure that this proposal only serves the rich, it does not help those who were the most harmed from the pandemic.”

A recently published report from GAP Institute, a research organization based in Prishtina, outlines the main pros and cons of the government’s proposal.

The report shares the concern that the move would not benefit the poorer layers of society, but also says that the money — calculated to be around 200 million euros from 2 billion — that the Trust manages, would provide a necessary infusion to the country’s depleted economy.

Another example says that people who might spend 2,000 euros from their savings now would lose around 4,000 euros in interest over the next 25 years.

From the 670,000 accounts that the Trust manages, only around half — 380,000 — are actively functioning. If the active accounts belong to people who generally have steady jobs, the most vulnerable section of workers will remain outside of the assistance program from the Trust.

“If the largest part of this sum [200 million euros] would be spent, that would lead to an increase in domestic consumption and investment,” says the report.

An important concern is the effect that the withdrawn 10 percent would have on the retirement plans of the contributors.

According to the GAP report, if a 40-year-old withdrew 1,000 euros from its savings, he would lose around 3,000 euros that were originally meant to be withdrawn in the retirement years.

Another example says that people who might spend 2,000 euros from the savings now would lose around 4,000 euros in interest over the next 25 years.

According to data gathered in 2019, around 46 percent of the contributors were under age 34, making it very unlikely that their savings would amount to any substantial sum.

The gender perspective of the consequences from the government’s decision are also important, as the report says there are significant differences — 33 percent of contributors are women, compared to 67 percent of men.

Moreover, the data shows that women also have another disadvantage in the matter, as they live 3.6 years longer than men, exposing them to more risk of being left longer without a pension.

The GAP report also notes that many workers do not understand the benefits — or not — of taking their money out.

When the measure was initially proposed, there was a lack of information and a sense of confusion among citizens, partly due to the unprecedented nature of the idea.

Although the Trust sends regular updates via email to inform contributors about their payments and the level of savings, many people don’t know how much money they have accumulated over the years.

Many of the contributors, usually agriculture or gastronomy workers, who were victims of informality among businesses in Kosovo, did not have a lot of information about the proposal and don’t think the money coming from the Trust is a viable option to ease the need for immediate funds.

Further, the high informality in the agriculture, construction and gastronomy industries leaves the most vulnerable benefiting little if at all from the Trust savings.

Iriad Muslija, 29, works as a hairdresser in Prishtina with his brother; the shop is the only source of income for the five-member family.

Since the pandemic began unraveling, business has dropped by 90 percent, according to a rough estimation by Muslija. 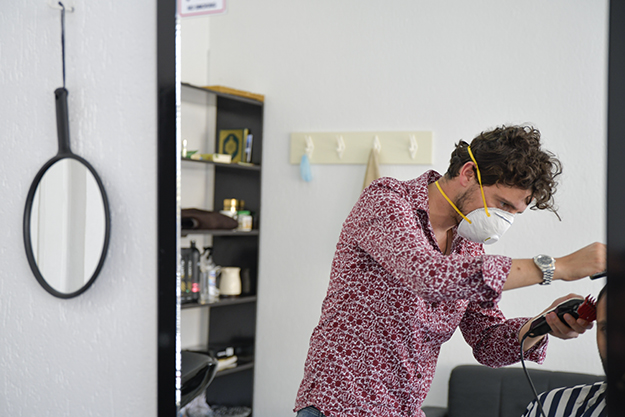 Iriad Muslija knows he has nothing saved in the Trust — like many workers in Kosovo — so this proposed plan will do nothing for him. Photo by Atdhe Mulla / K2.0.

After working as a hairdresser as either a paid worker or co-owner over the last six years, Muslija ultimately decided to open his own shop. Only a couple of months after opening, the pandemic arrived.

With 200 euros per month rent the pandemic put him in debt immediately. The owner of his building refused to lower the rent during the worst of the quarantine.

Before opening his own shop, Muslija worked in two different places in Prishtina, on a small salary, without a formal contract. No contributions to the Trust were paid for him at all.

“We would get paid with cash in hand. I don’t have a single cent in the Trust fund,” Muslija said, who didn’t need a second to think before answering.

In general, he and his family haven’t received anything from the government as aid during the ongoing pandemic, and Muslija does not hide his contempt for the government.

“There’s nothing here, everyone thinks about leaving the country.”K