When Kosovo’s Ministry of Health opened a call for volunteer doctors to prepare for the public health emergency with the COVID-19 pandemic, final year medical student Gent Jakupi was amongst the first to sign up.

With a group of other health professionals he was placed at the Students Center in Prishtina. From March 18, the center’s student dormitories were designated as quarantine spaces, where people suspected of being infected with the novel coronavirus would be isolated for 14 days.

This was the first experience as a doctor for Jakupi. “I told myself, ‘Now is the time; I’ll do the job I’ve prepared for during my six years of studies,’” he recalls.

As part of the medical team, twice a day he carried out examinations for people in quarantine, checking for symptoms related to COVID-19.

Having his first work experience on the frontline of a pandemic-scale disease was not easy for the 25-year-old, who says that a lack of organization, fear of infection and pressure from people who resisted quarantine made working there particularly testing. Despite these challenges, he managed to balance working and studying at the same time. 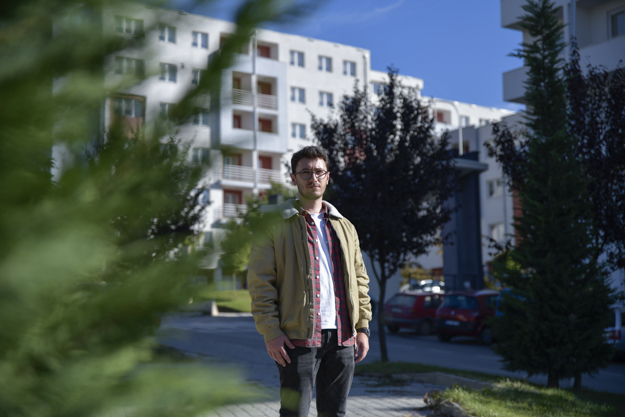 Newly qualified doctor Gent Jakupi says it is “devastating” not to be able to find employment in Kosovo while his elderly parents have to go out to work. Photo: Atdhe Mulla / K2.0.

Then in May, the curve of new recorded COVID-19 cases started to flatten and Kosovo’s government began to ease the various restrictions that had been in place for two months. At the end of that month, the decision was taken to close the quarantine facility at the Students Center.

For Jakupi, this meant the end of his stint serving as a volunteer doctor. He completed his studies, graduating in June, but since then he has been unemployed.

This came as little surprise to him, as he knew the health system and the limited opportunities in Kosovo for young doctors all too well. Nevertheless, he cannot hide his disappointment.

“It’s devastating to see my parents working in their old age, while I — in my youth and with all the energy — stay at home,” the young doctor says.

He is just one of 600 unemployed doctors in Kosovo. And like many of his peers, the dim prospects for employment in his chosen profession have left him looking at another, less desired option: leaving the country.

‘No opportunity left for us here’

Jakupi is currently taking private German language classes with a group of other doctors, who also plan to leave the country. He says that heading to Germany seems to be a common option for many medical students.

“We are 10 students in our [German language] class. Of these, six are doctors and one is a nurse. They all plan to leave soon,” he says. “There is no opportunity left for us here.”

The head of Kosovo Doctors Chamber (KDC), Pleurat Sejdiu, says a growing number of doctors and other health professionals are leaving the country. According to Sejdiu, between 2018 and midway through 2020, 286 doctors received a certificate of good standing, a document required for employment in EU countries.

With around 300 doctors graduating each year from the University of Prishtina’s Faculty of Medicine, Sejdiu says the high number of trained medical professionals leaving the country is storing up significant problems for the future of the health service, which already has an array of other problems. He points to high levels of unemployment for trained medical professionals, poor working conditions and low salaries as some of the main reasons why doctors leave Kosovo.

“Each doctor leaving Kosovo leaves gaps in the health system, especially when we consider the old average age of employed doctors, which is 51,” he says.

Jakupi affirms that there are few opportunities in Kosovo for general doctors like him, while opportunities to specialize are rare, and when they do appear they are often unpaid.

For many young doctors like Jakupi, self-financing is simply not an option.

This year, the Ministry of Health opened a new call for around 1,000 general doctors to undertake a specialization, but it is only set to finance half of these openings. The last call prior to this was in 2016.

The spokesperson for the Ministry, Faik Hoti, says that the main reason for the four-year gap in calls for specializations was limited budget, but he also points to other factors, including the lack of an adequate plan for human resources in health care — which is due to be completed by 2021 — and frequent changes in the Ministry’s political cabinet.

Hoti says that budgetary constraints is also the reason that half of the open places for specializations are self-financing. “If there were to be a larger budget, all of the specializations would be financed by the state,” he says.

But for many young doctors like Jakupi, self-financing is simply not an option.

“This means that you’re still a student,” he says. “You spent six or seven years finishing medical school financed by your parents, and now another four or five years as a financial burden for the family. [This would mean] you’ve spent almost half of your life as a student, without any income.”

Meanwhile, the consequences are already being felt on the ground within Kosovo’s health system.

Shortages of qualified staff became particularly apparent during the initial peak of COVID-19 cases in the summer, when regional hospitals in Kosovo raised concerns about the insufficient number of medical specialists needed to deal with the high number of patients infected with the coronavirus. In July, the Hospital of Vushtrria had no infectious disease specialist and only one pulmonologist, despite having been adapted to exclusively serve COVID-19 patients.

Sefedin Muçaj, vice dean* of the University of Prishtina’s Faculty of Medicine and epidemiologist at National Institute of Public Health (NIPH), says that Kosovo’s regional hospitals experienced shortages of doctors with various specialties, including epidemiology, microbiology and infectious diseases, all of which are central to dealing with diseases such as COVID-19.

While the pandemic has laid bare such structural issues, it is an open secret that Kosovo’s health system has been neglected for many years.

Ilir Hoxha, a public health specialist who teaches at Prishtina’s Heimerer College and the medical school of Dartmouth in the U.S., says that under-funding is one of the main reasons for the current situation in the health system.

“Because the GDP has been low, the health spending has also been lower than in other countries,” he says, adding that Kosovo spends about 8% of its budget each year on health. “That 8% translates to around 250 million euros spent on health annually, which is the lowest in the region.”

Kosovo’s health budget, which is predominantly paid for through taxes, only partly covers the population’s needs for health care. Most health services in the public system in Kosovo are technically provided for free by the state, except for some small co-payments (user fees) paid by patients. But in reality, around 40% of costs are covered by patients themselves through direct payments.

Hoxha says that accessibility and affordability of health services is an ongoing issue.

“The main problem is that most of the health care services are not available,” he says. “Even if they are available, you have to go for private treatment or even abroad, for which the financial cost is high.” 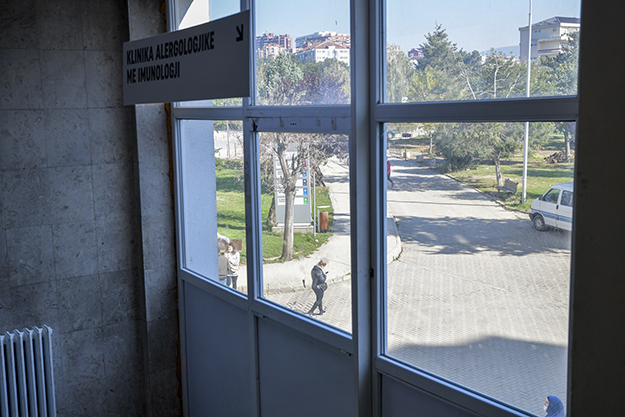 A lack of proper medical equipment has also been evident during the COVID-19 pandemic, with only 95 respirators available in the whole of Kosovo when the first cases of the virus were confirmed in March. Kosovo’s Prosecution is also investigating the death of several COVID-19 patients following problems with oxygen equipment at the University Clinical Center of Kosovo (QKUK) in July.

Meanwhile, a 2018 study estimates that in a given year, 80% of households in Kosovo spend money on medicines, pharmaceutical products, medical devices, and diagnostic and outpatient services, most of which are formally covered in the public health care system. Those who cannot afford to pay remain without proper care.

This problem is highlighted in the latest annual European Commission report for Kosovo.

“The scale of poverty means that around one fifth of the population have very limited access to healthcare,” the report says. “Access to basic healthcare is free, but spending on diagnostic services and medications is not reimbursed.”

Troubled past and uncertain future

Kosovo’s current health system has its roots in the Yugoslav period, when Kosovo was an autonomous province within the socialist federation. In the post-World War II period, the provision of health services was significantly increased, thereby generally improving the health of the population.

According to historical data in Oliver Schmitt’s book “Kosovo: A Short History of a Central Balkan Territory,” prior to 1945, Kosovo only had 21 doctors and 390 beds across all of its health care facilities, whereas by the 1970s it had nearly 500 doctors and more than 3,000 beds.

Average life expectancy in Kosovo also increased in this period, from 47 years in 1952 to 61 in 1968. However, this was still below that in the republics within Yugoslavia, where life expectancy was 66 years on average.

Any developments in Yugoslavia’s health system were severely disrupted by the wars and conflicts that accompanied its disintegration. This was especially felt in Kosovo, where the continuity of the public health system — along with most other public life — was effectively stopped for the Albanian majority population for a decade.

After the Milošević regime revoked Kosovo’s autonomy in March 1989, the Serbian government assumed control over Kosovo’s health system and closed the University of Prishtina’s Medical Faculty. Education for Albanians was forced into a makeshift, parallel system operating from private homes and basements, and medical students often had to be sent covertly to Albania to receive practical experience.

The numbers of practicing doctors in Balkan countries are the lowest in Europe.

More than 60% of ethnic Albanian health workers — an estimated 2,400 professionals — were fired or left their jobs as a result of the measures coming from Belgrade. In the meantime, to cover the needs for health care, Albanians organized a voluntary parallel health care system named the Mother Tereza Society, which lasted until the end of the war in 1999.

After the 1990s, Kosovo and the other new states emerging from what was previously Yugoslavia underwent reforms in their health infrastructure, aimed at modernizing their systems. However, in most countries these reforms were sluggish and led to more dissatisfaction with the system.

Today, health care across the region is often associated with long waiting lists, ineffective public systems and corruption and, just like Kosovo, most regional countries are suffering from doctors leaving their broken health systems in search of better prospects abroad.

Around 300 doctors leave Serbia each year, while the Medical Chamber of Bosnia and Herzegovina reported that 267 doctors left the country in 2018 alone. A similar trend is also seen in North Macedonia, as well as neighboring Albania, with more than 200 doctors leaving each year.

As a result, the numbers of practicing doctors in Balkan countries are the lowest in Europe.

When talking about the future of the health system in Kosovo — for which WHO does not provide specific data — newly qualified doctor Gent Jakupi sounds pessimistic. He says that with the trend of doctors leaving, we will come to a point where there won’t be enough medical personnel to cover the population’s needs.

If everything goes as he plans, this time next year Jakupi will be working in one of Germany’s hospitals. But he says that this wasn’t the future he had in mind when he registered at the Faculty of Medicine in 2013.

“We don’t want to leave the country,” he says. “But we are forced to.”K

* Editor’s note: The originally published version of this article described Sefedin Muçaj as ‘prorector’ of the Faculty of Medicine. This was corrected to ‘vice dean’ on 22.10.20.