A month of political calculations

Since the resignation of Prime Minister Ramush Haradinaj on July 19, citizens have lived with the pre-election fever of the political scene. Although officially the decision has not yet been taken to go to snap elections, de facto everyone agrees that this is where we’re heading within weeks.

As a result, even before the official announcement, every political party is in full-blown pre-election modus operandi.

Classic public relations exercises, social media activism by political leaders and their “cybernetic soldiers,” moralizations regarding negative phenomena that exist in our society, attempts to take credit for processes and decisions that are perceived as positive, accusations against one another for those that are perceived as negative, discourse with hints of political promises and calculations about potential coalitions are just some of the features that show Kosovo is nearing its next election cycle.

Harridaj’s resignation was followed by a period of official and public confusion as to whether his resignation implied the fall of the government — and subsequent elections — or leaves space for a new mandate. In fact, from the first few days after resigning, Haradinaj continued to call meetings of the government cabinet and went to work every day.

Article 95.5 of Kosovo’s Constitution explains the steps that must be followed after the resignation of the prime minister, stating: “If the Prime Minister resigns or for any other reason the post becomes vacant, the Government ceases and the President of the Republic of Kosovo appoints a new candidate in consultation with the majority party or coalition that has won the majority in the Assembly to establish the Government.” 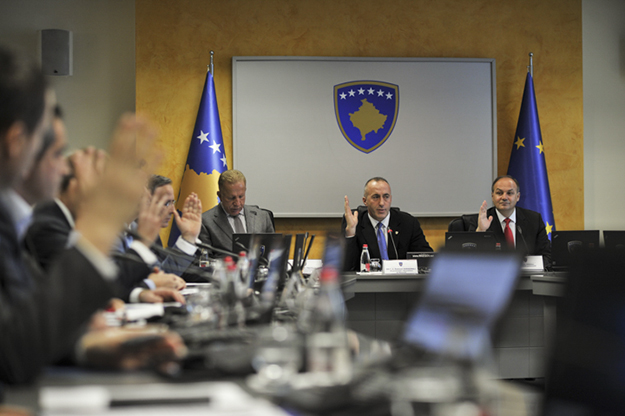 Despite resigning on July 19, Ramush Haradinaj has continued to lead the government, with analysts suggesting that this should not be the case. Photo: Atdhe Mulla / K2.0.

Resigning Prime Minister Ramush Haradinaj addressed the Constitutional Court with a request to interpret his resignation and to define the competences of the functioning of the government after this act. Haradinaj wrote on his Facebook page that the point of this request was not only to get an explanation of the legal situation that had been created after his resignation and to evade an institutional vacuum, but also to clarify the issue for similar situations in the future.

On July 30, President Thaçi started to consult with political parties regarding the next steps to be taken.

But with all the constitutional confusion over whether the president should mandate a new prime minister, go to elections, or whether we have a concrete case of a “resigning government,” from the start it has been clear that all political parties are ready and willing to go to snap elections.

With the passing of days, the situation has begun to become clearer, and the will of political parties to head to elections looks set to triumph above constitutional obscurities. In early August, the Presidency of the Kosovo Assembly set August 22 as the date when deputies will have the chance to dissolve this legislature by voting a motion of no-confidence in the government.

Such an act would open the way to solve the deadlock because it would oblige the president to announce snap elections no later than 45 days after the Assembly’s dissolution.

There are a number of potential reasons why the Assembly has not been dissolved already. According to the head of NISMA’s parliamentary group, the primary reason is that the European Union had suggested a delay in order to put in place an election monitoring team. 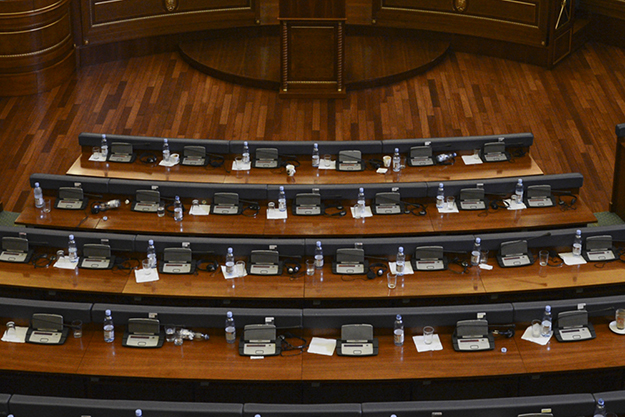 Deputies are widely expected to vote through a no-confidence motion in the government on Thursday, August 22, which will trigger snap elections within 45 days. Photo: Atdhe Mulla / K2.0.

Another reason is that all political parties — excluding AAK which seems to have grown in popularity as a result of Haradinaj’s resignation, which has been perceived by many as a “heroic gesture” — are interested in prolonging the election as much as possible, namely to delay it until the autumn. They have been caught unprepared by the idea of elections, since it came particularly at a time when politicians were planning for holidays. In short, the parties need more time to mobilize their electorates.

Thirdly, had elections been announced earlier, the campaign would have had to start in August — a month of summer, vacations and entertainment — and the parties feared that citizens would be irritated if they heard electoral promises during their vacation time.

As such, if deputies do indeed vote to dissolve the Assembly on August 22, then elections would most likely be held on either the last Sunday of September, or the first Sunday of October.

PDK lost many votes within the PAN — PDK-AAK-NISMA — coalition because its base was demobilized for two reasons: firstly, because there was little will to work for a prime ministerial candidate such as Haradinaj, for whom many had hard feelings from the past; secondly, with PDK required to give up a large part of its election list to candidates from AAK and NISMA, potential PDK candidates who were excluded from the list did not mobilize their supporters. 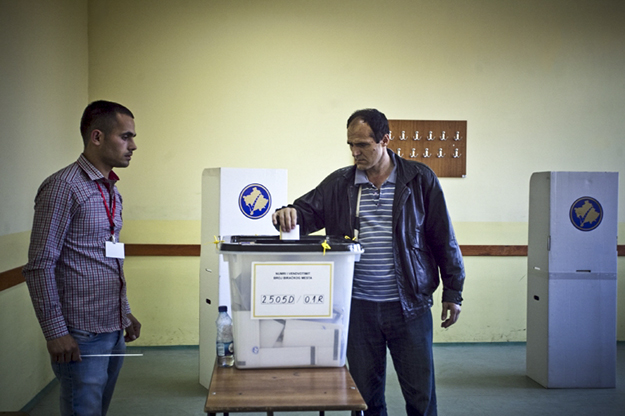 All parties are currently weighing up their political calculation on how best to approach the anticipated elections. Photo: Atdhe Mulla / K2.0.

The lessons learned from PDK’s 2017 suffering in particular may well lead political parties to be more sceptical of pre-election coalitions this time around.

However, on August 13, there were reports of a meeting between LDK leader, Isa Mustafa, and Vetëvendosje (VV) leader, Albin Kurti. The soft language used by the two former political rivals surprised many, however neither stated whether they had agreed upon a pre-election coalition.

An LDK-VV coalition has been much discussed, but the chances of this becoming a reality still seem somewhat slim.

Politics is unpredictable so no eventual coalition should be completely ruled out.

LDK is in a favorable position — since it ultimately managed to avoid splitting in the Assembly over its recent leadership elections — and as such it is highly unlikely to agree to give the prime minister’s post to VV.

Other potential areas of disagreement are the governance program (LDK is a center-right conservative party whereas Vetëvendosje is socialist nationalist) the assessment of the historical figure of Ibrahim Rugova (who LDK revere but Vetëvendosje have little love for), the deputy lists, the division of government resources and the approach to the dialogue (which LDK have long supported and VV has staunchly opposed).

But politics is unpredictable so no eventual coalition should be completely ruled out. In this sense, AAK and LDK are in the most favorable positions because they are parties that have not been rejected a priori by any of the other political parties, and so they could combine with others most easily.

In this regard, PDK are most handicapped because many parties have declared themselves as being categorically against forming a coalition with them after years in power that have been dogged by corruption and nepotism.

But it is likely that everything will depend upon election results. Ultimately, the result will define the coalitions.

The party that comes first will likely try to avoid forming coalitions with parties that have grown or have received a greater number of votes because it makes them harder to manage as partners. Instead, the winning party will likely try to secure two or three smaller partners, which do not have more than 10% of the vote, so that they can control the government cabinet more easily.K