Seventeen: A catalyst for progress

The value of art and culture for awareness raising and increasing community cohesion is often measured in terms of its scope. The prevailing narrative seems to be that to be significant it is necessary for a project to be realized on a large scale, to have a national — or better yet, international — reach.

But Nita Zeqiri and Ajete Kërqeli, founders of the Prishtina-based foundation Seventeen, insist that change starts with each of us, particularly in the neighborhoods and cities in which we live.

Nita and Ajete’s cooperation initially started as a collaborative duo for the purpose of creating visual and intellectual artistic works that explore psychological and social perspectives through video — experimental art. Building on this experience and on the need to restore to function alternative public spaces, they created the foundation Seventeen, which seeks to bring positive changes in society by enabling cultural vitality and creativity.

They felt that it was important to expand to other forms of intervention programs, because art and culture are means that can be used to initiate important social subjects. Together, they came up with the idea of creating an organization that could bring together new ideas from people of different backgrounds and professions, by uniting art, touching different social issues and trying to engage young people in different forms.

As Ajete puts it, “Foundation Seventeen was created to incite cultural activism for positive changes in society.”

Sihana Klisurica, who had previously been working as a journalist mainly covering culture and art, joined just as the idea was coming to fruition. Nita and Ajete had been activists in Kosovo for around a decade, mainly concentrating on human rights and women’s rights. It took two to three years to come up with their ultimate idea to establish Seventeen, which finally got underway in the summer of 2018.

The organizers wanted to find a name describing the foundation’s long-term mission. As they put it, “the number 17 has the meaning of personal growth and love for mankind.”

When breaking down Seventeen’s programs, it becomes clear that the initial attention is on individual growth, so that subsequently we can become active citizens, to encourage love and help for the community in which we live. So the name is an indicator of the long term growth plan and the mission of Seventeen. Through the foundation, Nita, Ajete and Sihana are trying to expand cultural activism and to raise awareness through art and culture.

Seventeen has organized multiple projects in its first few months, and has three main programs that reflect its mission: Art and Culture — using art and culture for positive change in society; Active Citizenship — civil activism through volunteer work and open discussions; and Project Space — reusing abandoned spaces for good purposes that benefit the community, restoring them into contemporary art centers or community centers.

Seventeen initially began to operate in Prishtina with the objective of expanding to the whole territory of the Republic of Kosovo.

The cozy Project Space, which lies a 10-15 minute walk from Zahir Pajaziti square in the center of Prishtina and opened its doors at the end of last year, is a very comfortable spot. You can sit where you like and work on your own projects, study for your next exam, have a cup of coffee or tea and simultaneously take part in activities about the most stigmatized issues in society, as well as grow culturally.

You can even discuss with one of the leaders of Seventeen your ideas and projects, potential cooperation opportunities, as well as how to increase welfare in the community. You will find them sitting and working, but always ready to talk to you.

As Ajete describes, the place can serve as “more or less a space for sharing thoughts in the broad meaning of the term, for challenging traditional methods of thinking and working. This is a common space that helps us come up with new ideas and initiatives that could become a part of our wider activities.”

One of these activities is the ongoing cooperation with playwright Fjolla Hoxha, who is part of the INTENT New Theatre platform. Each month, a theater play is projected in HD at Project Space. These are plays written by the world’s biggest playwrights, which are realized in theaters in London and other major cities in the world.

“It’s important that we are providing a different way to see theater shows,” Sihana says. “We invite students, young men and women, but also admirers of theater, to come and follow these activities and see how they were realized.” 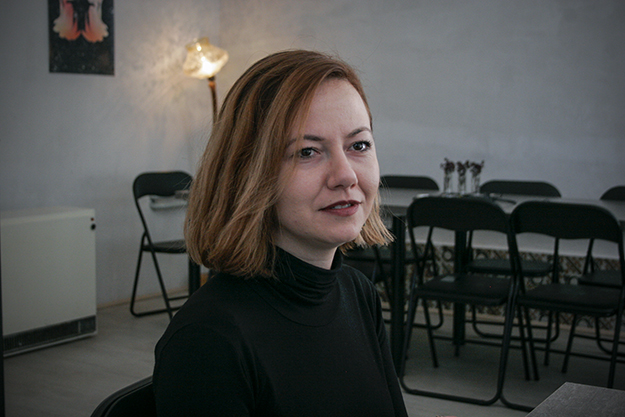 After the play, people have the chance to discuss it with Hoxha, about how it was directed, as well as the subject of the play.

The chosen themes — not only in this project but also in others — always encourage discussion. These discussions are conducted in the form of open debates. For example, in January, a discussion was held about mental health with psychologist Fortesa Kadriu.

Despite the importance of mental health, in Kosovo this issue is seldom dealt with and is often seen as a stigma. Ajete says that for this reason in particular, they tried to hold an open discussion so that the issue can be more understood, on the basis that the more you talk about an issue, the more likely it is that people will consider it as an important subject and begin to do something about it.

“Bit by bit, we can start to talk about mental health as we do with every other aspect of our health,” Ajete says.

They have also hosted a discussion with Uta Ibrahimi, a Kosovar Albanian mountaineer. The discussion focused on the menstrual cycle during mountain climbing, an issue that has seldom been discussed in Uta’s other appearances. The reason for choosing this subject was precisely to cover the gender aspect and the particular physical needs that women experience during mountain climbing.

If ideas for other projects arise during these discussions, people are welcome to use the Project Space to organize activities. Seventeen also plays the role of intermediary between different organizations, facilitating the realization of projects. So Project Space serves to achieve the foundation’s mission regarding active citizenship and the use of art and culture.

The first project that enabled the combination of the foundation’s three programs was the Metamorfoza project, which was developed last year. This project aimed to attract attention and raise awareness among the public and youth on the importance of history and old facilities, and explain why we must protect and restore them for usage.

The main objective was to raise awareness about collective memory. The organization of this activity lasted for around two weeks, however, due to the lack of funding the gallery of the collective history of this abandoned building was only open for the public for one day.

To begin with, organizers identified an abandoned building, the former canteen of the Ramiz Sadiku factory, which was one of the biggest companies in the period of former Yugoslavia. The facility was not only abandoned, but was also in a very bad condition.

For at least a day, they decided to restore the building’s history. Because they could not find any information in the archives regarding the history of its construction and functioning, Seventeen made an open call for 20 young people to volunteer. The volunteers were then split into groups and sent out to collect parts of the collective memory of residents of Pejton neighborhood in Prishtina, where the facility is located. After the field research, volunteers split into two groups: the performance group and the construction group.

Through this initiative, they created a historical timeline that portrayed what had happened in the facility since it was built around 1950. Two weeks after the workshop, the former Ramiz Sadiku workers’ canteen was revitalized for a day through a performance and exhibition.

The main idea was to restore the atmosphere that was once in the cafeteria, since workers also used the facility to organize different celebratory events such as birthdays, engagements, weddings, New Year’s parties, religious celebrations, etc. In addition to the events that the neighborhood residents recalled had happened in the facility, the exhibition also included its architectural layout, and a chronology of how the building ended up in the condition in which it is today — abandoned.

Another important project that Seventeen has been working on in the past year is the restoration of another abandoned building, with the aim of transforming it into an arts center. Nita explains that Seventeen is working on this project in partnership with two other organizations, Cultural Heritage Without Borders and Multimedia Center. This is only the first initiative, as the foundation is also identifying other buildings in other cities for the purpose of this project. 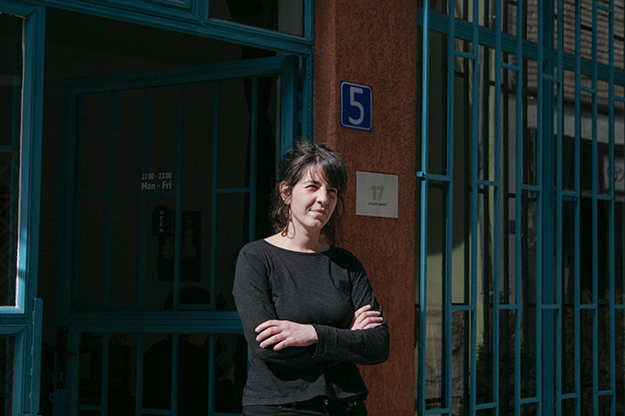 When asked about the success rate of the project, Nita, Ajete and Sihana laugh with pride, but say that it is difficult to measure success at this point. Nita says that Seventeen is operating based on a strategic three-year plan and has yet to yield the fruits of their labor, namely of their novel approach to social issues.

However, despite the fact that Seventeen has been operating for a very short period of time, the different events that have been organized have dealt with important issues for Kosovar society.

“In a way, the foundation Seventeen is becoming a catalyst for change,” Sihana says.

People have gradually started to better understand the objective of the new space and to use it for work. If you stop by Project Space, you will see youth groups having coffee or tea with laptops, paper and pen at hand, discussing with one another and taking part in evening activities.

Besides working with the foundation, Nita, Ajete and Sihana have continued to further their work for the empowerment of girls and women. Given that the three women are activists in this field, this initiative didn’t come as a surprise to those that know them. They said that they are aware of how difficult it is for Kosovo’s girls and women, who regularly suffer prejudice, making it hard for them to occupy leading roles.

Through Seventeen, they are also trying to show that there is space for girls and women by making sure to promote gender equality as one of the central tenets of their programs. 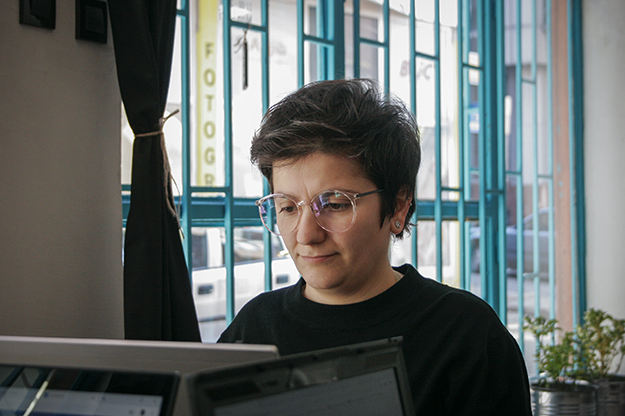 Ajete says that despite being faced with challenges at certain points along the way, they continue to try to break society’s taboos.

“Not only do we want to influence the elimination of general prejudices in society, we also want to empower young girls to believe that they can make it and that they have the necessary capacities and means,” Ajete says. “Young girls must not allow society to limit them from taking new initiatives. All the work that we’ve done in the past decade is directly related to the gender aspect and the importance of empowering girls and women.”

Their work simultaneously includes the creation of equal opportunities for every person, despite their gender or ethnicity. This has become one of the main values of Seventeen.K

Editor’s note: This article has been revised after publishing to correct some quote attributions and to clarify details on the formation of the foundation.