For Fahrije Hoti, the steps she took to create the agricultural corporation Kooperativa Krusha were the only solution.

After the war in 1999, she returned to her village of Krusha e Madhe in the Municipality of Rahovec to find burned houses. Left with two young children and the elderly parents of her husband — who was part of the long list of disappeared persons killed in a massacre in the village — she had no one else to provide for them.

To provide for their families, Hoti and her neighbors, who faced a similar fate, started to utilize fertile fields to plant peppers, which they would then pickle and use to make ajvar.

“They didn’t let us participate in fairs because we weren’t registered, so we sold abroad,” she says. “This is how we built our clientele and made our first contacts.”

Today, the cooperation opens its doors each morning to around 60 women from Krusha e Madhe, most of whom are widowed women from the village and surrounding areas. Their work produces 43 products that are sold in 200 markets throughout Kosovo, Switzerland, Germany and other European countries. 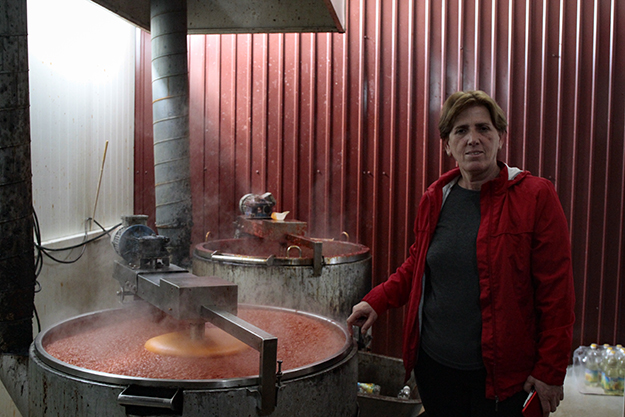 Fahrije Hoti owns one of 136 agricultural cooperatives that are registered in Kosovo. Around half of these are owned by women. Photo: Fikret Ahmeti / K2.0.

However, the long and wonderful journey of Fahrije and the other women was a difficult one. She recalls how social prejudices regarding gender roles have continuously hindered the development of her business.

“Others expect you to stay at home and wash, clean, cook, care for children and the elderly, serve your husband — otherwise you are stigmatized,” she says.

In Kosovo, perceptions like these still stand in the grim reality of widespread gender inequality, which is also prevalent in the job market.

Year after year, statistics continue to show that only around 13 percent of Kosovar women have jobs. In fact, even those that do are significantly less likely to hold a leading position, either in the private sector or in the public sector; various reports have shown that there is a stark imbalance between male entrepreneurs and female entrepreneurs in Kosovo.

Of all the businesses owned by women, hair and beauty salons dominate.

However, it only takes a quick glance at the small shops along the roads in the capital to understand that many small businesses that are owned by women were born from an old passion and a penchant for the trade.

Rudina Qosja spent many years baking sweets in her husband’s cafe. In 2017, she decided to translate her zeal for baking sweets into an individual business with a long term future. With the help of a small bank loan for her start-up, she opened Rudi’s Cake Factory. 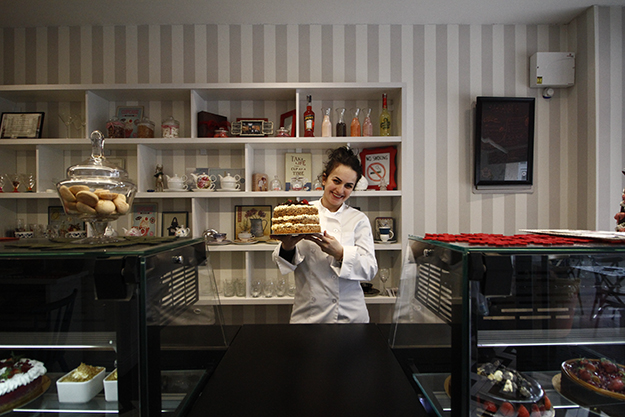 Rudina Qosja used to work in her husband’s cafe before opening her own cake making business, which has steadily grown since opening in 2017. Photo: Fikret Ahmeti / K2.0.

With fewer than 10 employees Rudi’s Cake Factory is officially classed as a “microenterprise,” a category that includes 98% of all businesses registered in Kosovo.

“It was very hard at first. I was the only worker when I first opened it,” she says. “Now there are eight of us.”

Rudina says that she continues to attend trainings when she can to continuously improve because she believes that success ultimately depends on the quality of the product. “If the product is not good and tasty, I wouldn’t recommend starting a business around it,” she says.

“We don’t know any women who own businesses, only men. So we don’t know who to turn to for advice.”

Gresa Krasniqi and Jorikë Sadiku also hope that their enterprise will one day have a safe future. The two 22-year-olds, both architecture students at the University of Prishtina, make hand-made bijouterie that they sell online. Despite the passion that they have for this project and the pride that they feel for having managed to create products that people like, they are skeptical as to whether it will progress.

“We don’t know any women who own businesses, only men,” says Gresa, as Jorika nods in approval. “So we don’t know who to turn to for advice.”

A 2017 Riinvest report highlights different reasons that encourage women to open businesses. According to the report, the main motivation for opening a business is the potential profit, with around 50 percent of women stating this as the main reason. Based on these findings, the authors of the report argue that the majority of women are encouraged by their intrinsic skills, a desire for independence and their own entrepreneurship, rather than by external circumstances.

However, the report also mentions that in around 23 percent of cases, women were motivated to start businesses due to unemployment, as was the case with Granita Grezda Lila. Having been unemployed for a couple of years, Granita decided to use her skills in handicraft to her advantage.

She owns a business that makes and sells handmade clay products. It is called Dhè and has operated since 2017. Granita graduated from the Faculty of Arts as a painter, but says that she hasn’t managed to dedicate herself fully to her business, since she also looks after her two children. 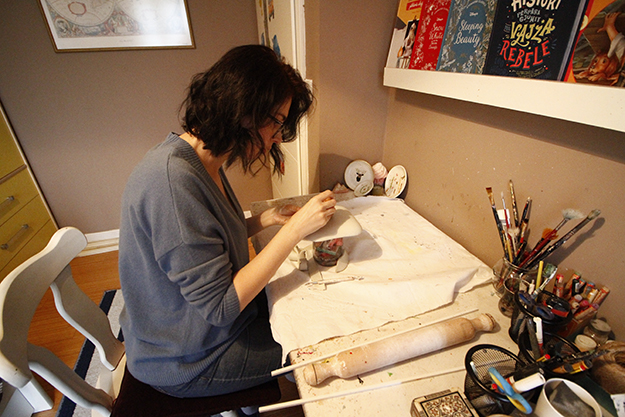 Granita Grezda has her own one-woman pottery business, which she manages to keep going alongside unpaid work such as caring for her children. Photo: Fikret Ahmeti / K2.0.

When her felt that her search for a job became hopeless, she decided to dedicate her passion to pottery.

“I bought material, clay, which I used for my work,” she says. “I had the idea for a long time because I was inspired by pottery.”

Granita says that at the beginning, it simply felt good and was something to do during the day, but then it organically started to grow.

“The children grew up so I started to create and I would send my work as gifts,” she says. “After working for six months, I opened a page on Instagram and gradually started to sell.”

Even in successful cases, businesses that are owned by women face many barriers that hamper their development and expansion efforts.

Some of the burdens that women face include time management because of their family obligations, such as preparing food and caring for their children. In a country where gender roles and behaviors are often strictly divided, the unpaid care work is usually taken for granted as a “woman thing.” The continued responsibility Kosovar women feel toward familial duties has repeatedly been cited as the main barrier to women’s economic participation in studies assessing the problem in the region led by the government and international organizations.

Granita talks about her flexible work schedule, which she had to adjust to the unpaid housework that she does. This makes it difficult for women such as her to expand their businesses; more than 75 percent of registered businesses in Kosovo owned by women are “individual businesses” rather than expanding into partnerships or limited companies.

“I share the room I work in with my son. He sleeps there, while I work in the mini studio that I created in the corner of the room.” Granita Grezda, Dhè

Other factors that hamper the development of woman-owned businesses in Kosovo include their lack of ownership of and access to property.

Although she has a registered business, Granita works at home. She says that the lack of a work space makes it difficult for her to hire an employee.

“If I were to have my own studio, the management of my business would be easier,” she says. “I share the room I work in with my son. He sleeps there, while I work in the mini studio that I created in the corner of the room.”

In Kosovo, only 16 percent of immovable property is registered under the ownership of women, whereas according to Riinvest, only 8% of women entrepreneurs in Kosovo own property. This percentage could be smaller since not all women who own businesses in Kosovo have registered their businesses.

Another barrier for women entrepreneurs in Kosovo is financing, as there are few financing opportunities available to new businesses from commercial banks.

Rudina says that financing the opening of a new business is very difficult because no banks offer loans for new businesses due to the risk of bankruptcy. She was lucky enough to receive a grant from European Bank for Reconstruction and Development (EBRD) for branding — which included support for the business logo, business cards, posters and everything that is related to the image of Rudi’s Cake Factory. Only after receiving this grant, and with further help from EBRD, was Rudina was able to secure a loan from a local commercial bank to finance her business.

They feel that it is better to sell in the market than to have a long term contract with a company that is owned by a woman.”

Furthermore, Fahrije Hoti from Krusha e Madhe adds that in certain cases just being a businesswoman has an effect on the attitude of collaborators. She says that she has often had to make contracts last minute and find new suppliers, because the contracted suppliers didn’t implement the contract.

“There were cases when, on the day when they were supposed to bring the product to us, suppliers went to the market to sell it there. They feel that it is better to sell in the market at a slightly higher price and profit this year rather than to have a long term contract with a company that is owned by a woman,” she says. “I had to make contracts with farms in Albania at the last minute and to pay transportation, which was a bit more expensive, due to the behavior of local companies.”

But despite the difficulties, Fahrije and the other interviewees say that owning a business brings many advantages. They were able to create new jobs, advance their skills and become role models for young girls and other women.K