Kosovo has a new government after the Assembly of Kosovo voted in favor of a coalition headed by Vetëvendosje (VV) and the Democratic League of Kosovo (LDK).

VV leader Albin Kurti is the new prime minister, heading up a cabinet of 15 ministers, while there are also 33 deputy ministers.

With a simple majority in the Assembly required to approve the new government, 66 deputies voted in favor, none against and 10 abstained.

On Sunday, the coalition agreement was approved by VV members in an internal referendum and by LDK in a vote by its ruling council.

The principles of the new coalition agreement — which has yet to be published — are in line with an initial proposal put forward by VV in November after the formal certification of election results: VV and LDK will have an equal number of ministers, the president of the Assembly is from LDK, the prime minister is from VV, while the issue of who will be supported to be the next president of Kosovo will be decided next year.

But both parties have made compromises on previously held stances in order to reach the final coalition agreement.

During the election campaign, Kurti promised that any government he led would have just 12 ministries. But when asked in a press conference on Sunday he said the decision to raise the number to 15 had been taken not to waste further time as it would be more costly and time consuming to create fewer “super ministries” at this time.

The new government is still significantly smaller than its predecessor, which was widely criticized for including 21 ministers and more than 80 deputy ministers.

VV’s deputy leader Glauk Konjufca is the new minister of foreign affairs and diaspora after moving from the position of president of the Assembly.

His former role subsequently went to Vjosa Osmani, LDK’s deputy leader and prime ministerial candidate in the election campaign, making her the first woman to hold the post. 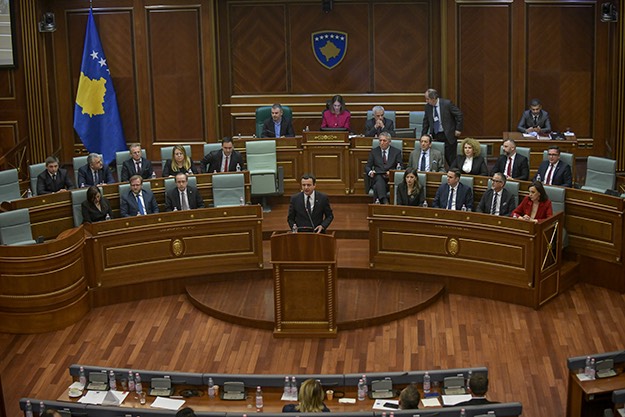 The positions of president of the Assembly and president of Kosovo have dominated much of the public discussion over the causes of delays in reaching a coalition agreement in recent weeks. LDK had previously insisted on making the presidency part of any deal, but VV had remained adamant that this should not be party political and should therefore be decided at a later date.

Meanwhile, VV appeared to blindside LDK by unexpectedly nominating Konjufca as president of the Assembly in December and subsequently stating that he would not be resigning.

The new government was not voted for by Srpska Lista (Serb List), despite the party having two ministers in the new government. The Belgrade-backed political party has all 10 seats reserved for Serb representatives in the Kosovo Assembly after securing the overwhelming majority of votes for Serb candidates in October’s election amid reports of voter intimidation.

On Sunday, as the coalition agreement between VV and LDK was announced, Srpska Lista deputy leader Igor Simić said on Radio Television of Serbia that his party would not be an obstacle to institution building. Prior to the main vote on approving the new government, the Serb representatives did vote to give their backing to the two Serb ministers, as required by the Constitution.

Kurti has previously stated that he would not work with Srpska Lista as they were somebody else’s “tool,” and was criticized by opposition deputies in Monday’s Assembly session for backtracking on his previous pledges.

Kosovo’s political scene has been in a state of uncertainty since July 2019, when Prime Minister Ramush Haradinaj unexpectedly resigned and announced that he was being summoned to the Kosovo Specialist Chambers as a suspect. This created constitutional uncertainty, as Haradinaj continued to lead government meetings for another month.

Early elections were ultimately triggered on August 22, when the Assembly voted to dissolve itself, and extraordinary elections were scheduled for October 6. In those elections, VV came out on top to become the biggest party in the Assembly with 29 deputies, with LDK in second place with 28. PDK, who had been in power since 2007, were pushed into third place, while Haradinaj’s AAK — who had formed a pre-election coalition with the Social Democratic Party — came fourth.

However, it took almost two months for the results to be formally certified after various appeals, recounts and actions through the courts.

The agreement for a VV-LDK governing coalition ultimately came after almost four months of negotiations between the parties. Much of the time the negotiations were stuck over the future presidential post, for which LDK insisted on VV’s endorsement of a candidate from its ranks, and at times they appeared on the brink of collapse.

On January 20, President Thaçi formally proposed Kurti as the candidate for prime minister after the VV leader informed him that he was ready to form a government.

The two parties announced the coalition agreement on February 2, one day before the expiration of the 15-day legal deadline for Kurti to present his proposed government composition to the Assembly for approval.K